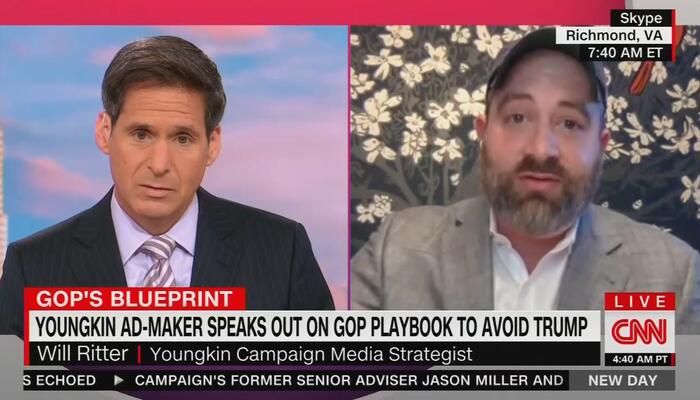 On Tuesday, one of Virginia Governor-elect Glenn Youngkin’s aides went on CNN to call out failed Democratic campaign tactics and to advise candidates to ignore mainstream media and Twitter. Will Ritter, who helped create many of Youngkin’s campaign ads, spoke to New Day co-host John Berman about strategies that worked for Youngkin and could be employed by Republicans in the 2022 midterms.

Ritter’s main suggestion was to focus on more local issues, instead of Twitter outrage or talking points centered in Washington, D.C.: “The Glenn Youngkin campaign was successful because we focused on three things that were affecting people’s lives on a daily basis. Schools, safety, and the cost of living. We specifically avoided national issues, D.C., Twitterverse issues, and talked to people about issues that they cared about.”

Berman wondered: “…what are those issues that you think that candidates and campaigns should avoid, or what traps do you think they should avoid?” Ritter specifically pointed out the harm and counterproductive nature of cable news networks, like CNN, and the role they played in Youngkin’s election:

In the weeks leading up to the election, CNN ran defense for McAuliffe, amidst the Democrat’s falling popularity and debate gaffes.

Ritter brought up McAuliffe’s failed strategy of attempting to connect Youngkin to Donald Trump: “This is a guy who is not on the ballot. He is not in office, and people are smarter than that.”

Ironically, Berman saw that as his cue to ask Ritter question after question about Trump, suggesting “that Trump is something of a risk for at least some Republicans around the country.” Ritter followed his own advice and didn’t “take the bait” of being distracted from the real candidate, Youngkin: “Glenn Youngkin wasn’t a Trump Republican, he wasn’t a Romney Republican. He was a Youngkin Republican, and people appreciated that.”

Despite the best efforts of liberal media outlets like CNN, Glenn Youngkin won the governor’s race in Virginia. Ritter believes this is something that Republicans should take note of: “What we got was a ten-point swing from just a year ago when Biden really killed it in Virginia. So I think that that is a blueprint going forward for the next cycle and for putting Democrats on defense.”

JOHN BERMAN: So moments ago right here on New Day, Maggie Haberman reported that last night, Donald Trump delivered a speech where he claimed that he helped deliver victory to Glenn Youngkin in Virginia. Something to the effect of, without Trump, Youngkin would have lost badly, and he knows that. It seems the Youngkin campaign might see things differently. One of Youngkin’s key advisers wrote yesterday before Trump’s speech, “365 days until the midterms, and the Democrats’ Donald Trump-era lease in the suburbs expired last Tuesday. 2022 will hinge on candidate quality and who is more believably addressing real problems that affect voters’ lives. Joining me now is that adviser, Will Ritter. His ad agency, Poolhouse, created more than 40 of Youngkin’s campaign ads. Will, thank you so much for being with us. That tweet that you wrote caught my eye. You talked about candidate quality and addressing the real needs of voters, and not the Twitter outrage stuff. What exactly do you mean by that?

WILL RITTER: Thanks, John, and thanks for having me on this morning. What I meant by that was that the Glenn Youngkin campaign was successful because we focused on three things that were affecting people’s lives on a daily basis. Schools, safety, and the cost of living. We specifically avoided national issues, DC, Twitterverse issues, and talked to people about issues that they cared about. So, what we got was a ten-point swing from just a year ago when Biden really killed it in Virginia. So I think that that is a blueprint going forward for the next cycle and for putting Democrats on defense.

BERMAN: It may be a model for Democrats too, right?

RITTER: It could be. But in this case, you know, you had Terry McAuliffe, who was a former governor. He knows what he’s doing. You know, the Democratic party would like to blame him and his candidacy, but I think that there’s a problem in the party. Which is Terry McAuliffe tried to rally up the Democrat base by talking about divisive issues, talking about issues that weren’t top of mind to folks, in an effort to drive up Democratic turnout. Because they figured that they already had the suburbs, and they just needed to juice that turnout. Well, that’s, that’s not true. It turns out that you can’t take any votes for granted, and Glenn Youngkin was a fantastic talent, worked 18 hours a day, getting that message to those key groups that it really resonated with.

BERMAN: Let me ask, when you talk about that Twitterverse/DC type of issue, what are those issues that you think that candidates and campaigns should avoid, or what traps do you think they should avoid?

RITTER: Yeah, I mean, you know, no offense to this program, but the cable news cycle moves very quickly, and if you try to run your campaign reacting to what’s on cable news, or reacting to what’s on Twitter, you’re gonna be changing your message every day, and we saw Terry McAuliffe doing that, you know, he would throw up an attack, and then he would, you know change it three days later. On the last day of the campaign, he had 11 different messages running on TV. We had three. Some of these issues, just, you know, it’s not that they aren’t important, but what is most important? I mean, he was running an attack ad against Glenn Youngkin on climate change. This is when gas is a dollar more than it was last year. This is when the price of groceries are going up. Also, most of his advertising was negative, and most of his advertising had to do with Donald Trump. This is a guy who is not on the ballot. He is not in office, and people are smarter than that. They, they knew what he was doing.

BERMAN: Let’s talk about Donald Trump. Because as I just noted, Maggie reported that overnight, Trump was talking to the NRCC in Tampa and said that Youngkin, you guys, would have lost without him. True?

RITTER: Donald Trump was supportive of Glenn. He endorsed him. But the fact is, John, when we were on the trail, on the bus, people, regular voters were not asking us about Trump, and it’s not a continual referendum on Trump all the time. They were asking us about schools. They were asking about the rise in crime rate, and Glenn addressed those issues instead of, you know, everything being a referendum on, you know, whether you like what Trump said today or tomorrow. So, I think the –

BERMAN: But you kept him at a distance. Let’s face it, I mean, you did, you did, you did keep him at a distance. And how important do you think that is for Republicans? Chris Christie out the other night speaking, gave a big speech where he said, we got to stop talking about the 2020 election. So, how important is that for Republicans to be successful in 2022?

RITTER: I think it’s really important. I mean, you don’t dwell on losses, and you have a vision that looks forward. And that can’t be about relitigating either the 2016 election or the 2020 election. It’s got to be going forward. On the last day, the closing message of Terry McAuliffe was we’re not going backward. And our message was, it’s time for a new day in Virginia. So, you know, one was backward. One was forward. We gotta keep going forward, and giving people a message that they can rally around.

BERMAN: And does that mean that Trump is something of a risk for at least some Republicans around the country?

RITTER: I think when Trump is relevant to people’s lives, and when, you know, when you have to weigh in on something that he has said, I mean, he’s a major figure, then you do it, but I don’t think that you take the bait and always talk about a former president when you’re talking about your candidacy. You know, I mean, Glenn Youngkin wasn’t a Trump Republican, he wasn’t a Romney Republican. He was a Youngkin Republican, and people appreciated that. And that gave a hall pass to independents and to suburban people who had maybe voted for Biden, who had definitely voted for Terry before, to come over and then vote for Glenn.

BERMAN: All right. Will Ritter, Poolhouse, thank you very much for being with us this morning. I appreciate it. 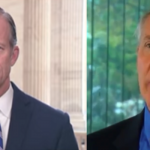 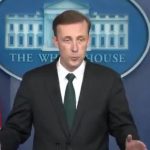