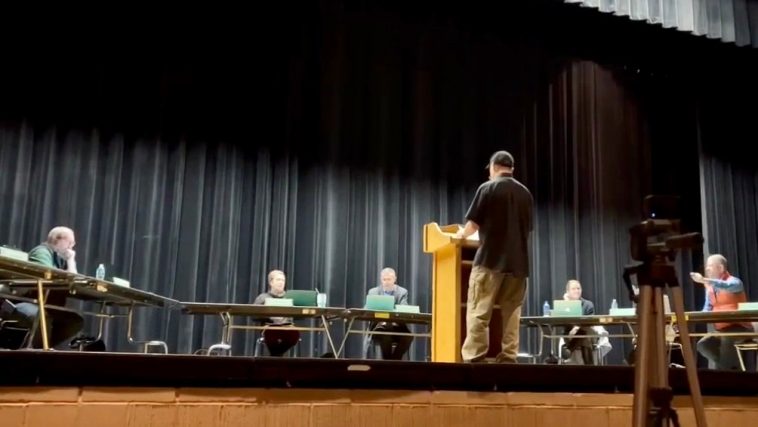 A parent in Freeland, MI was rudely interrupted by a school board member and was not allowed to talk as he addressed issues about National School Board Association and the US Attorney General’s memo during a school board meeting on Wednesday.

Eric Gladwish of Michigan spoke in front of the board member to express his concerns about critical race theory, draconian COVID policies, x-rated anti-Christian health curriculum and surveys, NSBA, and the attorney general’s memorandum labeling parents as ‘domestic terrorists.’

Pete Wiltse, a school board member tried to censor him for speaking the truth. Mr. Gladwish was able to finish his speech after the break and he claimed that the conduct of Mr. Wiltse after the meeting was worse than what you will see in the video. Many in the community are asking for the board member to resign immediately.

Mr. Gladwish released his statement to Gateway Pundit regarding the incident:

All across this country, parents have started to pay attention to what is going on in their schools. Freeland parents are no different. We started as a small group of concerned parents and quickly grew to hundreds. Freeland Parents Stand Up was started. View our mission at www.standupfreeland.com. Together with our close neighboring community parent groups, we have thousands of parents standing and working together to revive liberty and community values in our public schools.

We hold regular group meetings to discuss school issues. The board member in the video trying to censor me at the school board meeting, Pete Wiltse, was invited to one of our regular group meetings to take questions from parents. We thanked Mr. Wiltse for having the courage to come to our meeting as he has been the only board member to do so. Mr. Wiltse engaged with parents but became increasingly hostile towards our group throughout the meeting. Parents left feeling as if Mr. Wiltse was not on our side on many important issues. I believe Mr. Wiltse left frustrated as parents were not buying what he was selling.

As you can see from the video, Mr. Wiltse tried to shut me up right as I started to speak at public comment at the 11/17 school board meeting. I knew I was within my rights to speak and after the board took a short break to discuss board policy (I have never seen a break like this happen before), they let me finish my speech. The superintendent came up to me after the meeting and apologized for the behavior he witnessed from Mr. Wiltse.

After the board meeting as parents were still in the auditorium conversing with one another, Mr. Wiltse came off the stage where he was seated, and immediately targeted myself and another parent speaker and began to try and provoke an altercation. We politely asked Mr. Wiltse to please leave our space and not interrupt our conversation. He did not. He continued to try and escalate the situation.

After witnessing these events, many parents and community members have asked Mr. Wiltse to apologize and resign from the board immediately. He has not as of this comment.

Here is the transcript of Mr. Gladwish’s speech:

Are parents speaking in front of this board to express concerns about critical race theory, draconian COVID policies, x-rated anti- Christian health curriculum and surveys, or SCHD overreach, is that in and of itself, is that harassment and intimidation? The National School Board Assoc, the Michigan Assoc of School Boards, the United States Attorney General and many frightened politicians seem to think so.

Have you heard of the chill? I am referring to this in the first amendment context. We hear about the chill, the chill to speech. If this isn’t a deliberate attempt to chill parents from showing up at school board meetings and sharing their concerns with their elected school board, I don’t know what is. I mean – I’m not – I’m not aware of anything like this in American history.

We’re talking about the FBI. They want to use the FBI to intervene in school board meetings. That’s extraordinary. Are there FBI agents here today?

If appropriate spirited public debate on a whole range of issues is absolutely what this country is all about. Then why is it being investigated? Why the FBI? 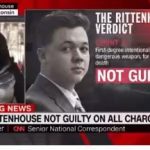 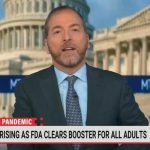