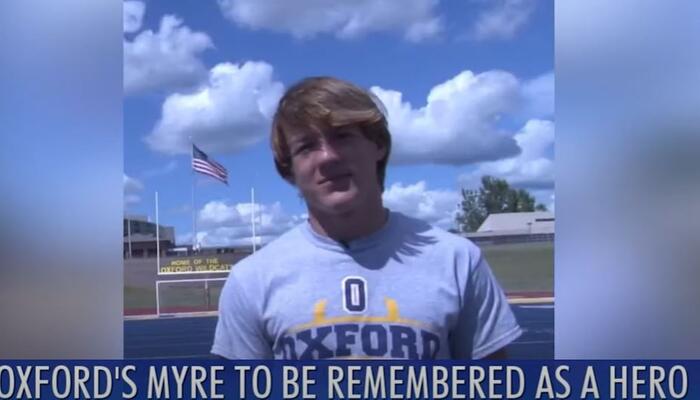 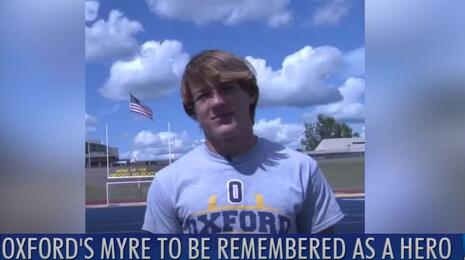 Though he was only 16-years-old, Tate Myre was a captain on the Oxford High School football team in Michigan. It’s no wonder he was also on Toledo University’s radar for his football and leadership skills. The heroic youth sacrificed his life to save the lives classmates during the tragic shooting at his school last Tuesday. Two other students and a teacher were also murdered by a sophomore shooter.

As students fled for their lives, Myre ran toward the shooter. After the star linebacker/tight end and wrestler attempted to disarm the shooter, a sheriff’s deputy found him bleeding in the hallway. En route to the hospital, Myre died of his injuries. News of this incredible young man’s bravery has spread far and wide.

Todd Starnes addressed in one of his radio commentaries:

“Tate was and will always be a beaming light for Oxford. It’s hard to put into words what he meant to me, but he will hold a special place in my heart forever. God reaches down and touches certain people, he was one of those people. I love you FOUR TWO.”

Myre was on the varsity football team as a freshman, and his leadership skills were so extraordinary that seniors were following him. The former athletic director at Oxford High, Jordan Ackerman, spoke about how rare that is.

“While Tate will most definitely be remembered for his athletic ability, his legacy will live on because he was such an amazing person who made everyone around him better,” Ackerman said.

Well over 100,000 people have already signed an online petition to rename the school’s football stadium after Tate Myre. The petition states:

“Tate is not just a hero to his fellow students at Oxford high school but a legend, his act of bravery should be remembered forever and passed down through generations, he put his life in danger to try and help the thousands of other students at Oxford High School.”

Tate Myre Stadium. It has a great ring to it and will be a great testimony for a young man and role model for other youths to emulate. 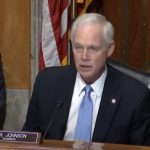 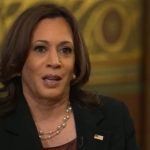