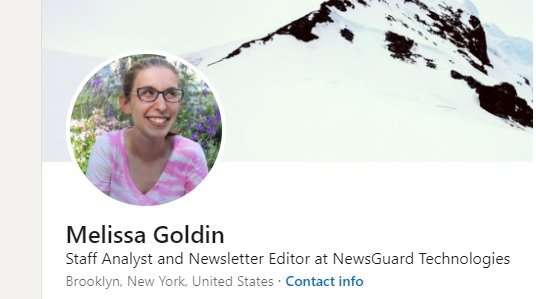 On Wednesday The Gateway Pundit received another harassing email from the self-appointed ‘fact-checker’ website NewsGuard.  The attacks from this entity are non-stop, dishonest, and beyond sophomoric.  This latest one was no exception.

The Gateway Pundit is under continual assaults from fake ‘fact-checkers’ like NewsGuard because our reporting is honest and the opposite of what the corrupt media’s narrative.  Overnight we received an email of another pending attack.

A junior Newsguard associate named Melissa Goldin sent us an email which said in part:

I am working on a piece for our monthly newsletter about websites that have continued to spread misinformation about the 2020 U.S. election and the Jan. 6 attack on the U.S. Capitol.

TRENDING: J-6 Attorney Releases Video of Capitol Police Pummeling Female Trump Supporter Victoria White in Tunnel Area — Beating Her with Batons, Punching Her in Face, Then They Paraded Her Through Capitol (VIDEO)

Here is Melissa Goldin’s bio at NewsGuard.  She’s a novice journalist with essentially no accomplishment.

Melissa Goldin is a Staff Analyst for NewsGuard. Prior to working at NewsGuard, Melissa was a reporter at BQE Media, where she wrote local news for publications including the Greenpoint Star, Queens Ledger, and This is Queensborough. She was previously the communications coordinator at The Berkeley Carroll School, where she edited the school’s alumni magazine, developed its social media strategy, and managed its website. She has also written first-person travel essays for CheapOair’s Miles Away blog and Freestyle Adventure Travel.

Goldin has held news internships at print, digital, and broadcast media outlets including Mashable, WXXI News, Community News Group in Brooklyn, New York, and City Newspaper in Rochester, New York. She was the publisher, editor-in-chief, and news editor of the Campus Times, the University of Rochester’s student newspaper. Goldin has a B.A. in English (Language, Media, and Communications) from the University of Rochester.

The people at NewsGuard should be ashamed of themselves for using Melissa as their attack dog on such an important issue.

Our country was founded on the belief that the winners of elections are to govern. When elections are stolen, the entire makeup of our country is destroyed.  This is a very serious issue.  We have been at the forefront in pointing out the many corrupt and criminal actions involved in the 2020 Election steal.  The article in question was another piece in painting this complete picture of the obviously stolen election in 2020.  This article was released the day after the results in Maricopa County were presented to the public.

A few days later we listed over 700,000 ballots that were at issue as a result of the audit work in Maricopa County and extrapolations of the canvassing done in that county.

BREAKING: THE LIST – Nearly 700,000 Maricopa County Ballots Identified with Issues from the Audit and Separate Canvassing Work to Date

This analysis and reporting were not performed by a recent graduate of journalism school.  The conclusions were prepared based on expert analysis gained from a lifetime of analytical and executive audit, operations, IT, and financial work.

The Gateway Pundit author of the piece, Joe Hoft, has 10 degrees or designations, including a BA, MBA, CPA, CISA, and FLMI.  He has overseen the financial reporting for entities over $1 billion in revenues.  He’s performed and led hundreds of audits around the world.  He is an expert in operations, finance, IT, and fraud audits, having performed audits in the US, Canada, the UK, Spain, Portugal, South Africa, Argentina, Australia, Taiwan, China, Hong Kong, Japan, South Korea, New Zealand, India, Malaysia, and Bermuda.  He’s presented in front of Audit Committees and Boards of Directors in some of these countries and has been a member of these committees as well.  His integrity is impeccable.  He also was an executive in Hong Kong for a decade involved in these activities across numerous countries.

Next time Newsguard should send a seasoned reporter with a background in auditing and financial reporting. instead they send a green reporter with a community background and years of leftist indoctrination. Their carelessness is noted.

Newsgaurd continues to embarrass itself. Have they corrected any of their fact-checks on the bogus Russia collusion nonsense yet? 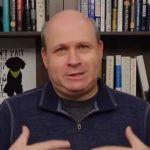 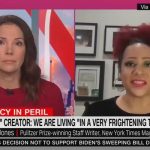