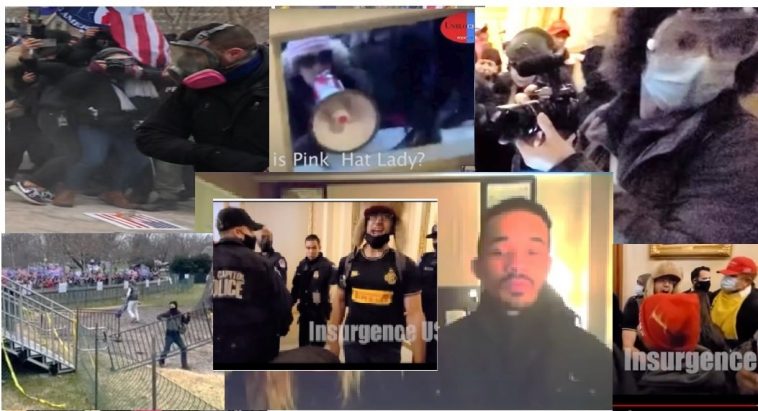 For weeks the FBI, Democrats, and the fake news media have insisted there was no Antifa or far-left activist infiltration of the January 6th protests where activists stormed the US Capitol.

We already know this is false.  The individuals who entered the US Capitol and caused damage on January 6th were not all Trump supporters.

Known members of Antifa were inside the Capitol and there was even an Antifa event called for that day at 11 AM nearby at the Washington Monument organized by John Sullivan that was closer to the US Capitol than the Ellipse where President Trump spoke to half a million supporters.

We also have presented footage of individuals who appear to be Antifa handing out weapons at the Capitol.

Recently The Gateway Pundit put together a list of 20 individuals who were at the Capitol on January 6th.  We are asking law enforcement and internet sleuths to help us identify these individuals who do not appear to be Trump supporters.  Some appear to be Antifa and others are known to be members of Antifa.

We looked at hours of video footage and created a list of some of the most violent individuals at the Capitol and others inciting violence and partaking in activities that Antifa is known for.  Many of these individuals appear to be related to Antifa and some have already been identified:

Persons of Interest Numbers 1 and 2

Inciting a Riot / Impersonating MAGA – John Sullivan arranged an Antifa event at the Capitol on January 6th and was there at the Capitol building to film the massive crowd of people. He was wearing a MAGA hat and mingling with the Trump supporters as one of them. He was accompanied by Jade Sacker who has connections to NPR and CNN who was also filming. When they breached the capitol building, John can be heard saying things like “We need to burn this B*&tch down!” and corralling people to go further into the building. When John and Jade were standing in the Rotunda, Jade exclaims “You were right, we did it!”, and John replied “I was trying to tell you… I couldn’t say much. You just have to watch my chat. Is this not going to be the best film you ever made in your life?” Clearly illustrating that they knew of and were part of a plan to breach the Capitol building.

John was also in the direct vicinity of the murder of Ashli Babbitt, and he was actively trying to convince the law enforcement officers to stand down and allow them through the closed doors. This ultimately ended with Ashli Babbitt being shot and killed by Capitol police from the other side of the closed door.  Because Sullivan was behind bringing in Antifa to the event he is likely responsible for the most violence inside the Capitol and a possible accomplice to the death of Ashli Babbitt.

Persons of Interest Numbers 3 and 4

At the time of Ashli Babbitt’s Murder – Inside Capitol Building Persons of Interest Numbers 5, 6 and 7

Acting suspicious – Attempting to conceal “MAGA” apparel. In possession of protective vests. Dressed in all black w/ black gear and black backpacks – similar to the attire of known Antifa agitators. The individual filming sneaks up behind them, says “Caught Em!” and then runs away from the three individuals. When the individuals realized they had been filmed, one or more of them chased the person filming demanding that he “Delete that!!”. It also appears as though the three individuals may have been inside the capitol at some point; on the ground near their belongings, there is a floor marker from inside the capitol. Inciting a Riot – Individual aggressively throws the gate on the ground and breaches the perimeter of the restricted area. He proceeds to walk up and down the fence line yelling at the crowd of individuals on the other side of the gate, encouraging/demanding that they follow him toward the restricted area of the Capitol grounds. Dressed in black w/ combat style gear / protective vest – similar to the attire of known Antifa agitators. He appears to be alone. Video Timestamp 02:06:00 – Outside of Capitol Building

Suspicious Activity / Inciting a Riot – Two male individuals were dressed in protective gear, carrying backpacks. They were inciting the riot and encouraging people to follow them to breach the capitol building. The female appears to be with the two men. Video Timestamp 02:26:00 – Outside of Capitol Building

Suspicious Activity – Individual dressed in protective gear with a backpack was pepper-sprayed. Their response was “Well at least we get $1,000.00 guys.”. This individual is also seen in the vicinity of Ashli Babbitt’s murder. It is well-known that Antifa is highly organized and commonly appoints a “medic” role during their planned black bloc street violence. The “medic” typically has no medical training and is often seen assaulting their opposition whether it’s police or Trump supporters.

During the US Capitol protests, a “medic” is seen walking the halls before Ashli Babbit was shot dead by Capitol Hill police. This is an Antifa tactic. When was the last time you saw an assigned “medic” at a Trump rally? Never-right? Because there is never violence at a Trump rally unlike the BLM or Antifa riots.

Here is the video of the man walking the halls with John Sullivan and others.

This man should be identified.

Persons of Interest Numbers 14 and 15

Suspicious Activities related to Inciting a Riot and Setting up Photo Shoots of people attacking the police: Individuals were setting up photoshoots and attacking police.  These two individuals were recognized from previous Portland riots. Video Timestamp towards the end of the riots in the pm This list of individuals appear to be coordinated.  They were attempting to incite the crowd.  They also were attempting to discredit Trump supporters at the Capital by wearing Trump gear.  Some if not all were involved in violent activities.  They all appear to be connected to Antifa.  Some are known to be connected to Antifa.

UPDATE: We previously reported on the “pink hat lady” who was barking orders to activists inside the US Capitol. She is also seen smashing a window with a large pole.

The woman was identified and later arrested.
She is a mother of 8 children! 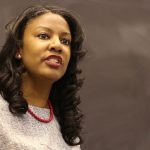 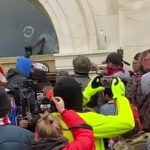