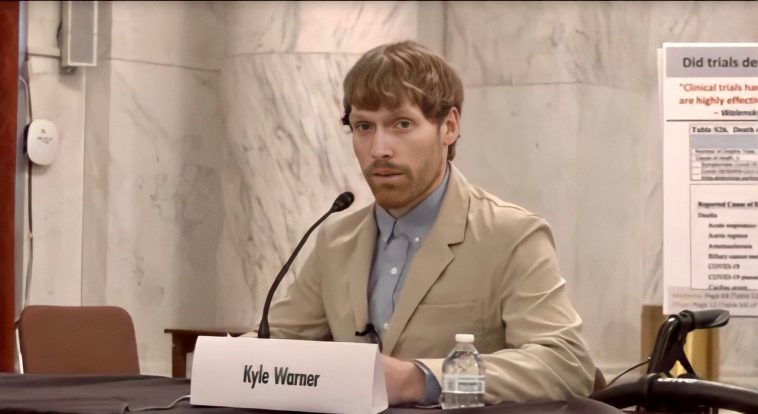 Kyle Warner, a 29-year-old mountain bike race champion, was diagnosed with pericarditis, POTS, and reactive arthritis a month after he took the second dose of the Pfizer vaccine. The vaccine has ruined his career and he is still unwell and hasn’t been able to work or ride a bike.

“As soon as they injected it, I had a weird metallic saline taste in my mouth. I asked the guy, ‘Is that normal?’ and he said no, they don’t hear of that much. The fact that the clinician doesn’t recognize that a metallic taste in the mouth could be a sign of an inadvertent intravascular administration concerns me because what happens is if the vaccine goes into your muscle, then it stays in your muscle, and it’s going to take half an hour to be systemically absorbed at all, or much longer than that. But if it goes into a vessel, you get a metallic taste straight away …The fact that you could taste that straight away is, to me, very suspicious of them inadvertently giving that into a blood vessel … Basically, you’re having the inflammatory reaction in your heart and in your joints instead of in your arm.”

Two weeks after he took the second dose, Warner started to notice some strange reactions in his heart and he experienced a series of accelerated heart rates. He claimed that he only took the vaccine shot because he wanted to travel internationally.

He regularly wears a smart watch that tracks his heart rate and knows what’s normal for him — and this was not. While sitting at rest, his heart rate would spike to the 90s and over 100. He decided to cut out all stimulants like caffeine, just in case, and took two weeks off from riding because he didn’t feel good.

After the break, he attempted to go for a ride and his heart rate spiked to 160 and remained elevated. Feeling weak and nauseous, he had his friend take him to the emergency room. He told the ER doctor that he’d heard about myocarditis as a side effect with the mRNA injections and he thought he was having this reaction. They completely brushed him off, telling him that he was not having that reaction but, instead, was having an anxiety attack.

After being told that his problem didn’t make him a priority to be seen, he sat in the waiting room for 3.5 hours and was ultimately given a shot of the nonsteroidal anti-inflammatory drug Toradol to treat reactive arthritis. His heart rate dropped down to 110, leading the doctor to tell him he was doing better, but he was still at nearly double his average heart rate.

The doctor’s solution was to refer him to a psychiatrist for what he described as a “psychotic episode.” According to Warner, since he suggested that his reaction was from the shot, the health care practitioners thought he was imagining things or “trying to be anti-vaxx or a conspiracy theorist.” Four days later, he ended up in the hospital again.

Days after being sent home from the ER, Warner again had problems with his heart — this time, a strong squeezing sensation along with cramping and burning. He went to a different hospital where they took his concern seriously, said it could be myocarditis — an inflammation of the heart muscle — and referred him to a cardiologist.

Kyle Warner told Dr. Campbell that if there’s a risk of getting the vaccine, there should be a choice in the matter.
“I believe where there is risk, there needs to be choice.”

Warner was invited to a press conference in Washington, DC that was organized by Senator Ron Johnson early this month.

Professional mountain bike racer, Kyle Warner, took Pfizer and ended up with Pericarditis, POTS, and reactive arthritis, which put an end to his career. He’s been told that he’s been sacrificed for the greater good. His message: Where there is risk, there should be choice. pic.twitter.com/NajUoModZR

Warner was one of the 20 people invited to speak at the event along with doctors, scientists, and people with adverse reactions to the shot. Sen. Johnson also invited Dr. Fauci, CDC Director, NIH Director, FDA Director, CEO of Pfizer, CEO of Moderna, and state representatives but none of them attended.

Warner thanked everyone who has been supportive and understanding of me speaking out on this issue on his Instagram account.

Thanks to everyone that has been supportive and understanding of me speaking out on this issue. Many of you know me as a pretty reasonable and caring guy and I never intended to be a part of this whole conversation.

However after my experience this summer, and listening to literally thousands of similar stories I feel like I need to stand up for the people who either cannot, or don’t have access to the same platform.

It’s not political, it’s personal. I want the best for the world and for humanity and it breaks my heart to see people suffering in any way. This past week in DC shook my view of the world drastically, and it made me realize how much we as average human beings need to come together and advocate for one another. Please listen to my message before judging or labeling. I’m just a dude who cares about others and wants the government to acknowledge and support what’s actually happening.