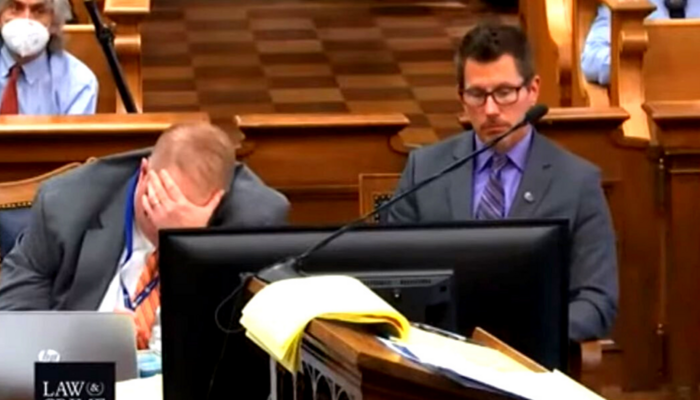 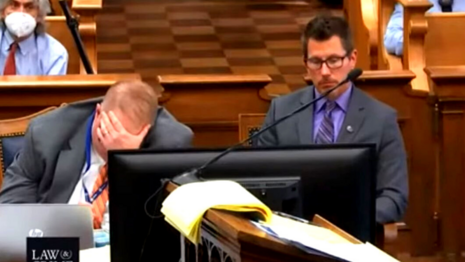 The admission by Gaige Grosskreutz at the trial of Kyle Rittenhouse that he pointed his gun at the teenager before he fired his rifle in self-defense was so damning during the Kenosha shooting trial on Monday, that one of the prosecutors immediately planted his face into the palm of his hand in sad recognition of the collapse of his case. This was also immediately recognized by most observers of the trial.

However, many media outlets, when reporting on that trial later that day, absurdly downplayed that dramatic moment by burying it in their reports. One example came from ABC News in both their online article about the case as well as in their evening World News Tonight broadcast. You get no hint about that significant admission until the very end of the article. In fact the subtitle even tries to defend Grosskreutz, “‘I was never trying to kill the defendant,’ the shooting survivor testified.” Adding:

A man who was allegedly shot in the arm by Kyle Rittenhouse during a deadly Wisconsin protest testified on Monday that he thought he was going to die as he faced the barrel of a semiautomatic rifle and saw the teenager “re-racking” the weapon.

Gaige Grosskreutz, 27, took the witness stand for the prosecution in the double homicide trial and testified that as a trained emergency medical technician and working paramedic, he went to Kenosha, Wisconsin, on Aug. 25, 2020, to provide medical aid to people who were injured during the protest as he had done at 75 demonstrations that summer.

That was how the article with its sympathetic coverage of “shooting survivor” Grosskreutz began. It wasn’t until many paragraphs later, at the very end of the story, that we get to the inconvenient truth, effectively buried:

During cross-examination from Rittenhouse’s attorney Corey Chirafisi, Grosskreutz said that he initially told investigators that he lost his gun that night before he was shot and the fact that he was armed was not mentioned in a $10 million lawsuit he filed against the city and county of Kenosha over the shooting.

“The way this case turns out has an impact on your ability to collect your $10 million, right?” Chirafisi asked.

Grosskreutz responded, “That is correct.”

“When you were standing 3 to 5 feet from him with your arms up in the air, he never fired, right?” Chirafisi asked Grosskreutz, referring to Rittenhouse. “Correct,” Grosskreutz responded.

“It wasn’t until you pointed your gun at him, advanced on him, with your gun, now your hands down pointed at him, that he fired, right?” Chirafisi asked. “Correct,” Grosskreutz said.

This attempt to bury the testimony that undermined the prosecution’s case was repeated in the ABC World News Tonight broadcast which also placed it near the end of the story.

Hopefully, World News Tonight anchor David Muir will at least try to look less sad than the facepalming prosecutor when he reports on the verdict in this case.