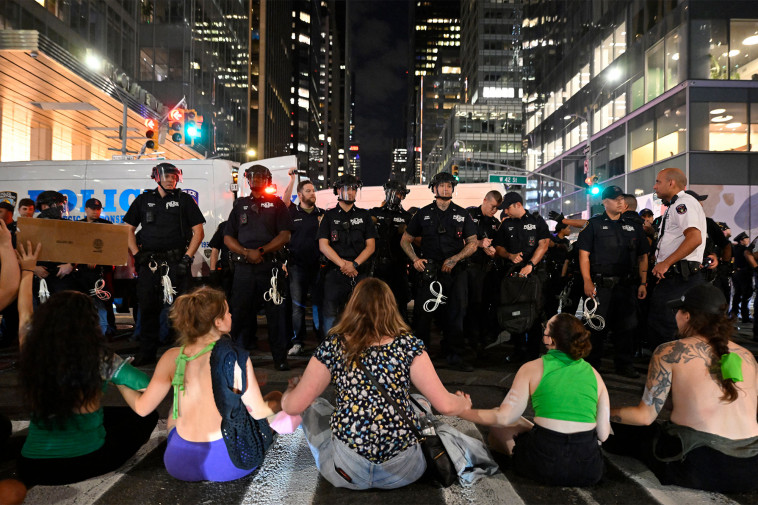 At least two dozen people were arrested after thousands of protesters took to the streets in Manhattan and across the country after the Supreme Court overturned the landmark Roe v Wade decision that protected women’s rights to abortion for nearly 50 years.

One cop estimated there were 17,000 people in the crowd. Many were holding signs that said “Keep your laws off my body,” and “No uterus, no opinion,” while shouting chants like “My body, my choice.”

During the march, the crowd made a stop at the News Corp building on 6th Avenue, which is home to Fox News and The New York Post.

“F– you!” they yelled at a pair of security guards.

Someone from the crowd also spraypainted “F—k Fox” on the side of the building.

Nearby, a protester appears to have broken a window and poured an unknown liquid on the floor at the Women’s National Republican Club on 51st street, photos show.

NYPD could not immediately confirm the incident but a marked police cruiser was parked outside of the club.

The crowd ended its crusade at Bryant Park, where several people were arrested around 11 p.m. as they blocked traffic on 42nd Street and The Avenue of the Americas. The Post counted at least a dozen individuals who were detained by police.

They had sat themselves down cross-legged in the middle of the crosswalk as a police officer warned them that they would be arrested and charged with disorderly conduct if they did not leave. In response, three women took their shirts off, completely topless.

Several other protesters were seen blocking a Harlem-bound M7 bus, with one climbing on the windshield and twerking. Another protester pretended to collapse in front of the bus.

Later, protesters threw something at a passing police car as dozens remained in the street blocking traffic.

“F–k 12!” a man yelled at a driver of a yellow Porsche after surrounding the car.

About four or five people were seen jumping onto the flatbed of an 18-wheeler as it drove up 6th Avenue. Moments later a phalanx of cops descended and arrested another handful of protesters.

Those arrested included a man in a “F–k Fox News” t-shirt and two tourists from Estonia.

At the park, a woman who identified herself as Elizabeth from the Party of Socialist Liberation, speaking in front of a stage, told the crowd “The Supreme Court needs to be abolished,” and called for “a summer of rage.”

In Washington D.C., another large protest on Capitol Hill was mostly peaceful with the exception of some back and forth shoving between protesters and cops and an American flag that was set on fire in the street.

The protesters, many clad in black and carrying opened black umbrellas, marched past the DC courthouse Metropolitan Police headquarters chanting “burn the precinct to the ground.” A group at the front of the march held a large banner that read “They cannot control our bodies.”

“F—k Judge Thomas” they chanted at one point.

The crowd returned to the Supreme Court building without spray painting or vandalizing any property.

Across the county in Los Angeles, protesters took over the LA Freeway before they were dispersed by police, according to posts on the Citizen app. Video shows the crowd chanting as they march down the highway. Other gatherings were reported in other parts of the city as well.

In Downtown LA, video shows protesters setting off fireworks as they clash with LAPD officers.

Protesters could be seen exchanging shoves with police in tactical gear at the intersection of Main St. and Fifth Street, video from KTLA reporter Andre Tinoco shows.

More officers were seen sprinting towards the intersection as tensions rose between cops and protesters.

Moments later an LAFD ambulance arrived on the scene. The area was shut down for about an hour before police said it was cleared. Police said “no incidents were reported.”

In Phoenix, people were sent screaming and running after police officers fired tear gas from inside of the capitol at the crowds on the front lawn, video shows.

“It was kind of scary because I thought they were shooting flares at us,” one protester in Pheonix told The Post. “It got all smokey, it was hard to breathe for a little. We were literally just yelling at people inside the building.”

At a seemingly peaceful rally in Cedar Rapids, Iowa, a truck ran into pro-choice protesters after a verbal altercation, sending one woman to the hospital.

The incident happened near the city’s courthouse around 7:20 p.m., according to KCRG-TV, and was partially caught on camera. Video shows the pickup truck was seen driving at a slow speed as two people pressed against its front hood and ran backward to avoid being run over.

Other major U.S. cities such as Chicago, Boston and Philadelphia saw their streets packed with thousands of protesters enraged that over 40 million women across at least 26 states are expected to be banned from getting an abortion.

While the high court’s decision to uphold the Mississippi law challenging Roe does not outlaw abortion, it does hand regulatory power to state governments. 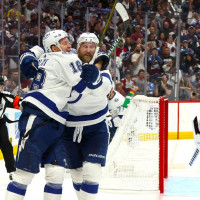 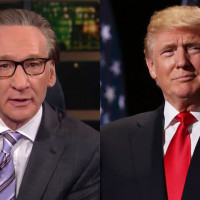