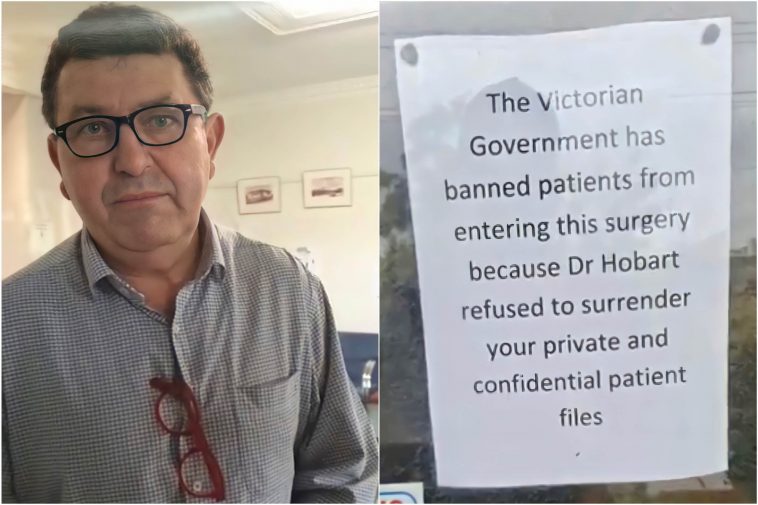 Seven authorized officials from Australia’s Department of Health raided Dr. Mark Hobart’s surgery clinic in Sunshine North on Wednesday afternoon and seized confidential patient files, an appointment book, and other documents after he refused to hand them over to the government.

Dr. Hobart, a family doctor for three decades,  has been a staunch critic against the Victorian government’s approach to lockdowns. He accused the government of implementing their lockdowns based on “irrational” data. He also added that the lockdowns have caused more deaths than the virus.

Dr. Hobart is well known for being an anti-vaccine and anti-lockdown activist. He is vocal in his support of the use of IVERMECTIN as Covid-19 treatment and urged the government to use the drug instead of using the clinical trial vaccine.

Australia’s government accused him of allegedly handing out fake COVID-19 vaccine exemptions. The Health Department says vaccine exemptions can only be issued to people who meet the criteria. According to the tyrants in charge, they are concerned that a small number of doctors across Victoria are giving exemptions to some people who might not be eligible.

On Wednesday, a viral video from one of his supporters who witnessed the incident went viral on Facebook and has now 19 thousand shares after seven officials from Health Department raided his clinic and seized confidential patients’ files and other various documents.

“Seven authorized officers from the Department of Health and seized my confidential patient’s file and my appointment book and other various documents. They say they’re going to give me an itemized list of what they’ve taken and it was quite an intimidating experience.”

The Health Department put up a notice on his clinic saying, “The Victorian Government has banned patients from entering this surgery because Dr. Hobart refused to surrender your private and confidential patient files.”