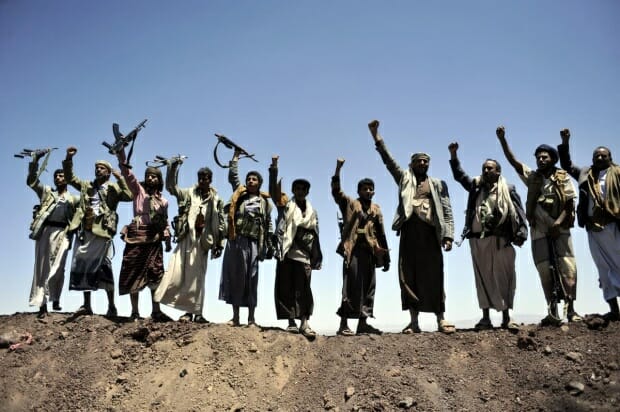 The Biden Effect–
Shiite Houthi rebels stormed the US Embassy in Yemen and took 25 security employees hostage this week.

The US Ambassador and key staff were not at the compound and were relocated to Saudi Arabia in 2015 due to the continued fighting.

Yemeni security employees of the U.S. government have been detained in Sanaa, Yemen, after the compound that once housed the American Embassy was breached by Iran-backed Houthi forces, the State Department said.

For years, the Houthis have controlled Sanaa, the capital of Yemen, and much of the country’s north. The U.S. diplomatic mission suspended operations there in 2015, near the start of the country’s protracted bloody civil war between the Saudi-backed government and the Houthis, who receive support from Iran. The American ambassador and key staff were relocated to Saudi Arabia, a major U.S. ally in the region.

A spokesperson for the State Department said Thursday that a “majority” of the U.S. Embassy staff who were detained have been released and that Washington was engaging in “unceasing” diplomatic efforts to free the security guards still in custody. It is not clear why the Yemeni employees were detained.

The State Department also called on Houthi forces to “immediately vacate” the embassy compound and to “return all seized property.” The detained Yemeni employees are security personnel who had been guarding the outside of the facility, according to a State Department official.

The Biden State Department released a strongly-worded statement and asked for the hostages to be released.

Iran-backed Houthi rebels stormed the US embassy in Yemen and have captured 25 hostages. The State Department is demanding their release. pic.twitter.com/TW6L40n8Is