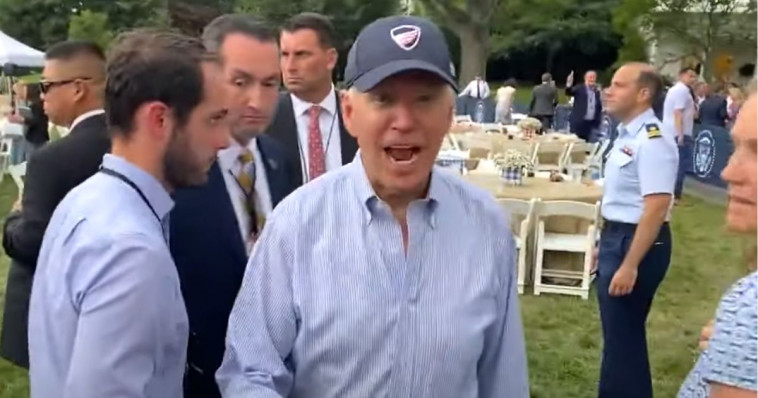 The tragic comedy of errors that is Joe Biden’s failed presidency was marred by yet another epic blunder that lends more credence to mounting speculation he’s unfit to lead.

On Tuesday, the 79-year-old career politician misrepresented the latest New York Times/Siena College poll indicating that a majority of Democrats don’t want him to run for re-election.

The poll, published Monday, found that 64 percent of Democratic voters want someone else to run for president in 2024.

“Mr. President, what’s your message to Democrats who don’t want you to run again?” a reporter asked Biden at the White House Congressional Picnic on the South Lawn.

“They want me to run,” he retorted.

“Two-thirds say they don’t,” the reporter pointed out.

Biden then got a crazed look in his eyes and approached the reporter.

“Read the polls. Read the polls, Jack,” the president said. “You guys are all the same! That poll showed that 92 percent of Democrats, if I ran, would vote for me.”

Will Biden run for re-election?

For the record, that wasn’t the question. It’s not surprising that most Democrats said they would vote for Biden if the only other choice was former President Donald Trump.

The reporter reiterated: “A majority of Democrats say they don’t want you to run again in 2024.”

Biden defensively groused that “92 percent said if I did they’d vote for me.”

“What’s your message to Democrats who don’t want you to run again?”

Numerous Twitter users noted that the president misconstrued the question and responded to an imaginary question no one had asked.

Biden claims the NYT poll found that 92% of Dems would vote for him if he ran.

That 92% number is *specifically* in reference to Democrats being presented with a choice between Trump or Biden. The poll found that 64% of Dem voters want another 2024 candidate ⬇️ https://t.co/RgJLR24MxK pic.twitter.com/KkfU8s93YD

Somebody’s not reading the polls, and it’s not “Jack.”

This guy is absolutely clueless. He’s under water with just about every Demographic. Even the African American voting bloc, which is very loyal to the Democrats, is turning against him. https://t.co/rg9Z4EGJll

Some opined that Biden’s handlers aren’t sharing his sinking approval ratings with him.

Are they not showing him the real polls? https://t.co/9WvgZp83Yg

His handlers probably tell him his approval rating is at 99%. https://t.co/VCjRLOcrkC

The Times/Siena poll was an unqualified indictment of Biden’s dumpster-fire presidency.

Only 33 percent of survey respondents said they approve of his job performance, and a whopping 77 percent said the country is going in the wrong direction.

While polls aren’t always reliable, this one accurately captured Americans’ escalating disgust with this administration’s incompetence at managing the numerous, catastrophic crises engulfing the nation.

But don’t tell Sleepy Joe that. According to him, you shouldn’t believe your lying eyes.

Samantha Chang is a politics writer, lawyer and financial editor based in New York City.

Samantha Chang is a politics writer and financial editor based in New York City.