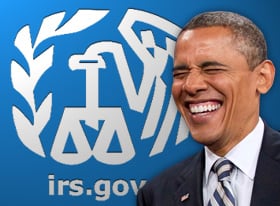 Here’s a blast from the Obama regime’s past– The Obama IRS targeted over 400 conservative groups for unprecedented scrutiny.

A Congressional report revealed 10% of Tea Party donors were audited by the IRS.  This is 10 times more often than regular Americans.

Like most scandals by Democrat operatives, no one served time for these criminal actions.  No one was fired.  Not one single person lost their retirement.

Now Joe Biden is going to hire 87,000 more IRS agents to crack down on average Americans.

The IRS already has dedicated audit teams for high net worth individuals.

The doubling of staff is for everyone else.

They’re right.
The IRS agents will be ordered to target ordinary Americans — especially the conservative kind.
We all know it’s true.

Tesla CEO Elon Musk and Rep. Lauren Boebert teamed up to rip President Joe Biden’s effort to double the staff of the Internal Revenue Service in a bid to crack down on ultra-wealthy tax cheats.

To put the proposed staffing boost into context, the Colorado Republican compared it to the workforces of Tesla and Apple, which employ 70,000 and 154,000 individuals, respectively.

“An increase of 87,000 supposedly to monitor the 614 billionaires in America,” she tweeted Sunday, prompting a response from one such billionaire, Musk — worth some $311 billion.

“The IRS already has dedicated audit teams for high net worth individuals. The doubling of staff is for everyone else,” Musk warned, without offering any further explanation.

The proposed hiring spree is part of the Biden administration’s Build Back Better agenda as it seeks to boost funding to the IRS by some $80 billion and crack down on tax dodges, according to Politico.