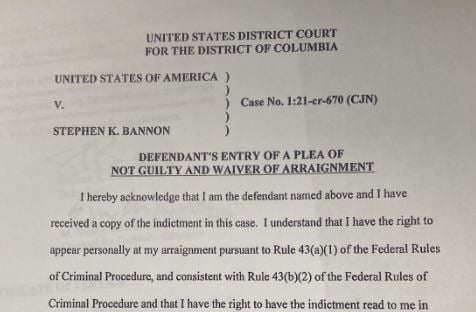 Democrats need the J6 story to continue to make headlines.
It’s a wicked strategy – But it’s all they got.
Just like with the fake FBI-CIA phony Trump Collusion narrative during President Trump’s tenure, Democrats want to keep the Jan. 6 conspiracy alive and in the headlines today.

Democrats have nothing else. They have to make up garbage narratives and they know the fake news media and Tech Giants will cover for them.

On Monday former Trump Chief Strategist Steve Bannon turned himself in at the DC FBI Field House following his indictment by the Biden Regime on Friday.

In an unprecedented move, Steve Bannon was charged Friday, after he failed to appear on Capitol Hill that morning, with two counts of contempt for failure to comply with a committee subpoena. Democrats ignore congressional subpoenas all the time. Numerous Obama officials did this during his two terms. But on Trump officials get indicted for it so that Democrats can keep the phony Jan. 6 story running.

Steve Bannon emerged defiant from court on Monday promising to go on offense. On Wednesday Steve Bannon filed a motion with the court waiving his right to tomorrow’s scheduled arraignment and entered a plea of NOT GUILTY to charges criminal contempt of Congress.

NEW: Steve Bannon files a motion with the court waiving his right to tomorrow’s scheduled arraignment and enters a plea of NOT GUILTY to charges criminal contempt of Congress pic.twitter.com/yFyA5O8LF1