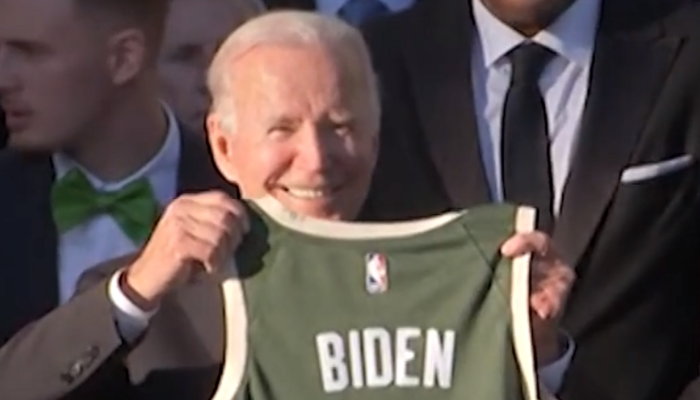 To say the NBA’s relationship with the office of the President of the United States has been complicated over the past half-decade is an understatement. 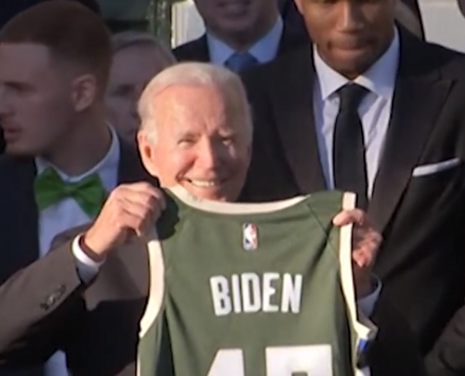 The defending NBA champion Milwaukee Bucks visited the White House on Monday, reviving an American sports tradition (the winners of the NBA, NFL, NHL, and MLB seasons visiting the White House) that had taken a five-year hiatus in the basketball world. This was largely due to former President Trump repeatedly criticizing the NBA and its players for taking anti-American stances on social justice, respecting the national anthem, voting rights, and racial equality.

It’s no secret that the NBA consistently promotes values that have roots in communism and other anti-American philosophies, and that they all hated Trump for calling them out for their woke ideologies. This is why every team since the 2017 Golden State Warriors declined to visit the White House as long as Trump was in office (the Warriors did visit Washington D.C. after their 2018 title run, but chose to meet with Trump’s predecessor, Barack Obama, instead).

But now that there’s a President who values the same cancerous philosophies the NBA does, everything is sunshine and rainbows for at least another four years.

Biden praised the Bucks for their work in being a megaphone for “unity” in the turbulent summer of 2020.

“In sport and in a democracy, unity perhaps is the most elusive thing and the most necessary thing,” Biden said. “But that’s who this team is, they’re unified. That’s who we are as a nation.”

However, nothing the Bucks did last summer helped America strive towards unity.

The entire team was in uproar after finding out news about the Jacob Blake shooting in Kenosha, Wisconsin, on August 23, 2020. Naturally, players claimed were outraged that a black man was shot by a white cop, because that automatically means the cop was a racist bloodhound looking to exterminate blacks. This perpetuated the narrative that whites are inherently bad and that blacks are constant victims of oppression.

However, Rusten Shesky, the officer who shot Blake, was acquitted after video surveillance showed that Blake, who was wanted on felony charges, reached for a knife while being arrested.

Seems like the Bucks should have waited before they started crying foul, but instead they sowed division and furthermore are getting applauded for it by one of the most powerful men in the free world.

Furthermore, fawned over the Bucks for being strong supporters of the COVID jab: “You encouraged fans to get vaccinated,” Biden said. “I just want to thank you.”

For now, it seems like upcoming NBA champions will have a much more easygoing time when they get invites from the White House. Unfortunately, it appears their commonality will stem from being as anti-American as possible.