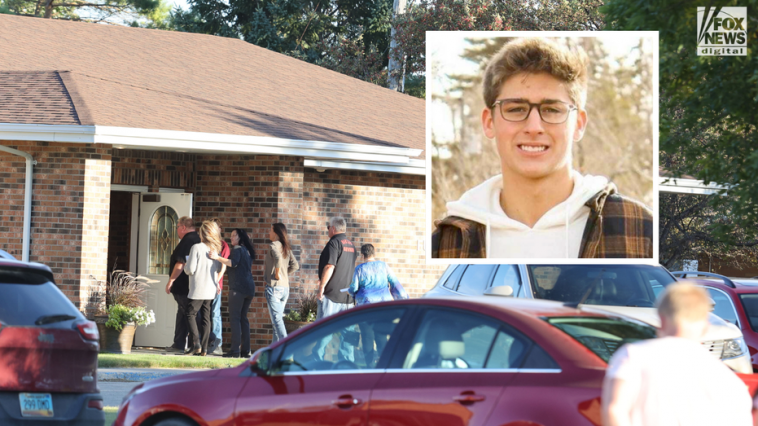 The family of Cayler Ellingson hosted a prayer service on Sunday night at a funeral home in Carrington, North Dakota, for the teenager who died after Shannon Brandt allegedly admitted to mowing him down with an SUV.

Shannon Brandt, 41, admitted during a 911 call during the early morning hours of Sept. 18 to using an SUV to hit Ellingson and said that the teenager was part of a “Republican extremist group” who was calling others to “coming to get him,” an affidavit states. North Dakota police said they have no evidence suggesting Cayler was part of a “Republican extremist group,” and said the incident wasn’t politically motivated.

At least 100 people could be seen going into the funeral home located in Carrington on Sunday night. Family friends of the Ellingson’s said that Cayler was an “exceptional child” with a bright future ahead of him.

Ellingson graduated from Carrington High School in May 2022 and recently began studying to be an ultrasound technician at Bismarck State College for Diagnostic Sonography.

An obituary for Ellingson states that he “enjoyed making people laugh and being the class clown.”

“He took pride in his looks and appearance and was voted ‘best dressed’ in his class,” the obituary states. “Cayler was a kind, smart, and big-hearted person. He would go out of his way to help with anything and would give the shirt off his back if needed.”

In the obituary, Cayler’s parents and one brother said that he will “forever be on our minds.”

SHANNON BRANDT KNOWN BY NEIGHBORS FOR BOOZE-FUELED ‘RAMPAGES,’ BEING ‘NUTS HIS WHOLE LIFE’

“Our love for you will never go unnoticed, you will forever be on our minds, it’s heartbreaking to let you go, but please never say good-bye your time on earth was not finished. Please watch over all of us. Until we meet again, we love you Cayler, ‘give heaven some he–.’” the message from the family reads.

A funeral for Cayler is being held on Monday afternoon at a local church in Carrington.

An obituary for Ellingson states that he “enjoyed making people laugh and being the class clown.” (Matt Symons for Fox News Digital)

One person who was close with the Ellingson family said that the 18-year-old was “absolutely not” a Republican “extremist,” as Brandt alleged, and said he was an “all-around great kid.”

Brandt was taken to jail and charged with criminal vehicular homicide, as well as leaving the scene of a crash involving a death after the incident. He was released on Tuesday after posting bond, which was set at $50,000.

Community members are shocked by the low bond, and one person who spoke with Fox News Digital said that the $50,000 bond was “extremely low,” adding it should have been higher.

Four of Brandt’s neighbors, when speaking with Fox News Digital, said that the incident wasn’t motivated by politics, but rather mental health issues.

Photo shows mugshot for Shannon Brandt, the man who admitted to hitting an 18-year-old with his car after the pair had a “political dispute.” Outset image shows partially redacted court records. (Stutsman County Corrections/Court records)

During a Monday court hearing, Brandt told a judge that he wasn’t a flight risk and disagreed with the bail amount.

“I have a job, a life and a house and things that I don’t exactly want to see go by the wayside — family that are very important to me,” Brandt said.