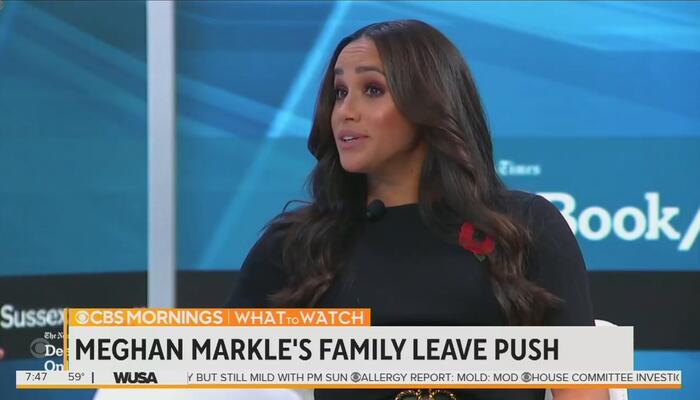 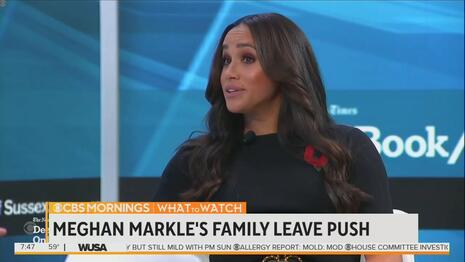 The far-left CBS Mornings hosts on Wednesday cheered Meghan Markle for weighing in on U.S. politics, praising the Duchess of Sussex. Personal friend Gayle King blasted the “haterade” from the British royal family for objecting to attempts to sway Congress on expensive paid family leave.

In a clip talking to journalist Andrew Ross Sorkin, Markle was asked, “Do you have any anxiety about getting involved in politics?” She responded with the tired cliche that politics isn’t politics when it’s a liberal issue: “I don’t see this as a political issue, frankly…. Paid leave from my standpoint is a humanitarian issue.”

Sounds like a cup of haterade to me. I like what Meghan Markle said… she said it’s not a red or blue issue, it’s a humanitarian issue. And we can all agree, parents, that parents need time with their children. She talked —  they have a five month at home and little Archie. She knows what she’s talking about.

At no point did the hosts mention that Markle is actually cold calling Republican senators to help Democrats. Despite the absurd claim by Prince Harry’s wife that this isn’t a “political issue,” it obviously is. The liberals at CBS Mornings wouldn’t let pro-lifers get away with saying that saving babies is simply a non-political issue.

For more on King, and her history of Democratic donations and vacationing with the Obamas, so here.

For more on the wealthy Tony Dokoupil sounding socialist as he rants about the rich leaving “us” with “crumbs,” go here.

The Democratic propaganda on CBS was sponsored by Progressive Insurance. Click on the link to let them know what you think.

A transcript of the segment is below. Click “expand” to read more.

VLAD DUTHIERS: We’re starting with the Duchess of Sussex facing criticism from the royal family for her effort to get Congress to approve paid family leave. Meghan says she’s personally calling and speaking with members of Congress as they decide whether to include family leave in a sweeping policy bill. Prince Harry’s wife appeared at a New York Times event yesterday. Watch this.

ANDREW ROSS SORKIN: Do you have any anxiety about getting involved in politics?

MEGHAN MARKLE: I don’t see this as a political issue, frankly.

MARKLE: Look, there’s certainly a precedent amongst my husband’s family and the royal family of not having any involvement in politics, but I think this is —  paid leave from my standpoint is a humanitarian issue. 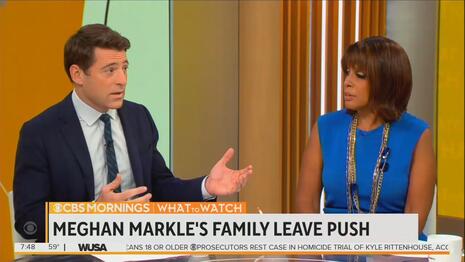 DUTHIERS: You see Sorkin there. CBS news royal contributor Roya Nikkah quotes palace sources as saying Meghan is using her title out of context and should have no say in American politics.

KING: Sounds like a cup of haterade to me. I like what Meghan Markle said, where she said this is not — she said it’s not a red or blue issue, it’s a humanitarian issue. And we can all agree, parents, that parents need time with their children. She talked —  they have a five month at home and little Archie. She knows what she’s talking about.

DOKOUPIL: By the way, it is a bipartisan issue, Republicans support it as well. There’s disagreement about how to pay for it, that’s what holds it up. It’s not a political issue in this country. It’s settled.

NATE BURLESON: When you have an issue that everybody can relate to. It’s a human issue.

KING: I think sometimes people like to take pot shots at Meghan just because they can.

KING: Royal people want to take pot shots at her. Listen, she’s speaking what she knows. She really does want to help.

DUTHIERS: She’s having phone calls with members of both sides of the aisle. Republicans and Democrats. As you say, it’s a bipartisan issue.

KING: But I like that, Tony. It’s not people. It’s the palace.