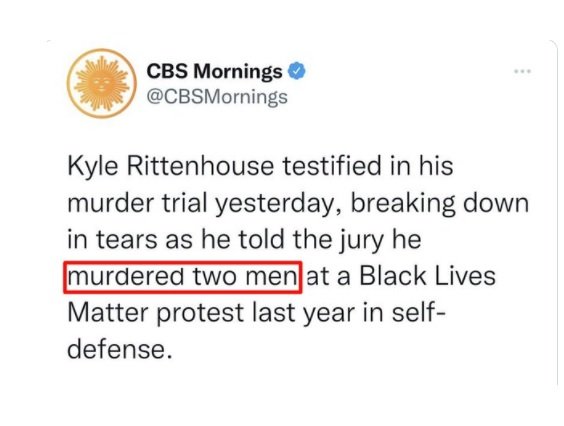 CBS News posted a tweet declaring Kyle Rittenhouse a murderer on Thursday during his trial in Wisconsin.

CBS tweeted: “Kyle Rittenhouse testified in his murder trial yesterday, breaking down in tears as he told the jury he murdered two men at a Black Lives Matter protest last year in self defense.” Kyle Rittenhouse did not say anything close to that. The Illinois teen described a situation where he was under attack, assaulted, and threatened with death by the Antifa domestic terrorists in Kenosha last year during the riots.

Then he broke down in tears.

Of course, this shows you what the liberal fake news media believes about the shootings in Kenosha. They’ve already made up their mind on who is guilty here. CBS News deleted a November 11, 2021, tweet declaring Kyle Rittenhouse a murderer, even though Rittenhouse’s trial is ongoing and the verdict on his August 25, 2020, actions has not been reached.

The deleted tweet reported on Rittenhouse’s November 10, 2021, testimony, in which he broke down in tears while talking.
Regarding the first shooting fatality of August 25, 2020, Rittenhouse testified that he was running to put out a fire when a man named Joseph Rosenbaum allegedly ambushed him. Rittenhouse claimed one man, Joshua Ziminski, walked toward him with a pistol while Rosenbaum was closing in on his right side.