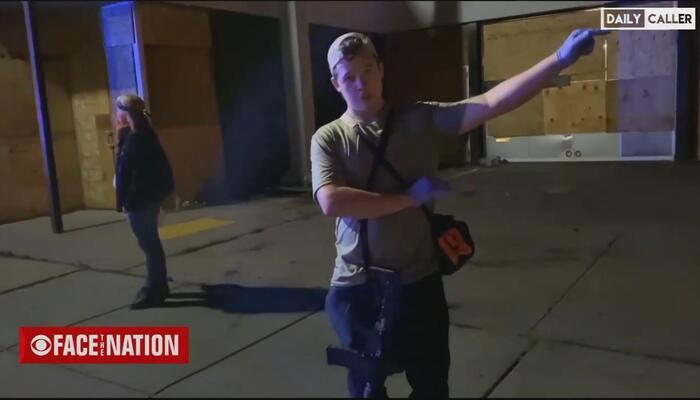 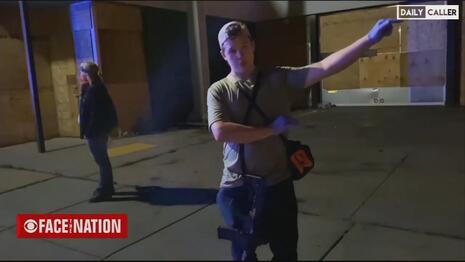 The segment didn’t pass the smell test from the get-go. In the video report that kicked off the topic, correspondent Mark Strassmann continued to peddle the debunked lie that the Rittenhouse had brought the rifle over state lines.

“In the chaos of Kenosha last August, Rittenhouse, then 17, killed two men with his AR-15-style assault rifle. He claimed self-defense. Rittenhouse drove in from Illinois armed for battle. He knew outage already ran high,” he falsely proclaimed.

The trial itself proved that to be a lie cooked up by the liberal media. The overzealous and sleazy prosecution didn’t even charge him with that crime and said in the courtroom that the rifle was in Wisconsin already. Meanwhile, they charged him with two other crimes that ended up getting thrown out.

But that didn’t stop Strassmann from pushing the falsehood and trying to tie Rittenhouse to racism. “This country’s ongoing moment of racial reckoning, vigilantism, and self-defense claims from armed people who deputize themselves,” he added after having the uncle of Jacob Blake say they wanted to see him “spanked” in prison.

After the report, Brennan brought on NAACP president and CEO Derrick Johnson who not only repeated the state lines lie but expanded it to an illegal purchase. “And here you have a 17-year-old who illegally purchased a gun, traveled across state lines to protect property that was not his for owners who did not invite him, and he put himself in harm’s way based on the rhetoric that he seen on social media platforms,” he asserted.

Further, Johnson went on to suggest Rittenhouse rallied “under the banner of white supremacy” with only minor pushback from Brennan:

BRENNAN: But there is no evidence of him being a white supremacist himself, correct?

JOHNSON: Well, it’s not about the evidence of him being a white supremacist.

“It’s not about the evidence”? That is not justice, that a character assassination mission for a corrupt political cause.

Not only was he lying to smear Rittenhouse, but he was also lying to protect the rioters. Johnson claimed Black Lives Matter is “not an organization” and suggested the riot that night in Kenosha was actually a “peaceful protest” organized after “innocent” Jacob Blake was shot by police.

In reality, which Brennan was avoiding for some reason, it was a violent riot, Black Lives Matter is in fact a Marxist organization, and Blake was shot by police as he tried to kidnap his kids from his girlfriend with a knife.

CBS’s peddling of lies and smears against innocent Kyle Rittenhouse was made possible because of lucrative sponsorships from Coventry Direct and Facebook. Their contact information is linked so you can tell them about the biased news they fund.

MARK STRASSMANN: In the chaos of Kenosha last August, Rittenhouse, then 17, killed two men with his AR-15-style assault rifle. He claimed self-defense.

Rittenhouse drove in from Illinois armed for battle. He knew outage already ran high. Two days earlier, a white cop had shot a black man seven times in the back. The officer was never charged.

Jacob Blake remains paralyzed from the waist down. Justin Blake, his uncle, angry about the Rittenhouse verdict.

JUSTIN BLAKE: We knew he wasn’t going to jail for life. But we thought he’d go to jail and get spanked a little bit for his actions.

STRASSMANN: And he believes had Rittenhouse been black…

BLAKE: They’d had him on the ground eating dirt or shot him dead on sight.

STRASSMANN: Lots to unpack here. This country’s ongoing moment of racial reckoning, vigilantism, and self-defense claims from armed people who deputize themselves. And frustration with what many see as America’s two systems will of justice, separate and unequal. This murder trial of three men in Brunswick, Georgia, has all those issues.

MARGARET BRENNAN: So, the jury accepted Kyle Rittenhouse’s explanation that he was acting in self-defense. President Biden said, you know, this was disappointing in some ways but the jury system works, and we have to abide by it. You say the verdict itself was dangerous.

DERRICK JOHNSON (NAACP, president and CEO): You know, it’s hard for African-Americans to reconcile what we witnessed in that trial. We have far too many individuals sitting in jail for crimes they didn’t commit or overcharge for crimes that were committed. And here you have a 17-year-old who illegally purchased a gun, traveled across state lines to protect property that was not his for owners who did not invite him, and he put himself in harm’s way based on the rhetoric that he seen on social media platforms.

So, it’s hard to reconcile the verdict with the experience many African-Americans have faced over several decades. So, this trial for us is a warning shot that vigilante justice is allowed in this country, or in particular communities.

BRENNAN: Kyle Rittenhouse, as you know, has become this sort of icon for some within the conservative movement. He was used back– during the campaign by the– by the then-Biden campaign team in a campaign video that positioned him as a white supremacist. His mother said that was defamatory to him.

The bottom line is this is being politicized. And I’m wondering what you think the impact of that is.

JOHNSON: Well, the current political environment has allowed for this type of behavior. The prior administration opened the door, and many individuals who operate under the banner of white supremacy have run through the door, whether Charlottesville or the killings in Pittsburgh at the synagogue, or in Louisville.

And unfortunately, until we have mature politicians willing to stand up, regardless of political affiliations, and address the questions of mob violence, vigilantism, but more importantly, the underlying issue of race in this country, something we have never truly addressed.

BRENNAN: But there is no evidence of him being a white supremacist himself, correct?

JOHNSON: Well, it’s not about the evidence of him being a white supremacist. It is about the position that individuals like him find themselves in where they think they have to go and protect property because of peaceful protests, in some cases of Black Lives Matter organizing.

And when you have scenarios like what took place in Wisconsin that caused people to stand up with for this police officer, who paralyzed another innocent individual, you have to begin to ask– we have to ask ourselves the question: Do we value the lives of not only African-Americans but everyone?

And what he did was take up the mantle because the political climate allowed for him to do that. We had a white supremacist in the White House, and it opened the door to this floodgate of vigilante violence. And that’s the real question here.