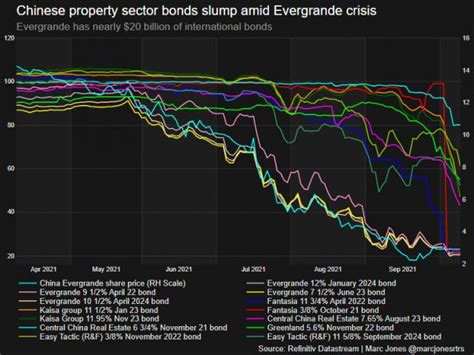 China company Evergrande is in terrible shape.  Once one of the largest companies in the world, the China real estate behemoth is now only one-tenth of its former size, and the worst is yet to come.

We’ve reported on Evergrande for months.  The world’s largest issuer of China’s commercial paper was going under.

Although the media won’t report it, Evergrande was bringing down the entire China property sector (one-fourth of China’s GDP).

DEVELOPING: China’s Property Sector Bonds Are ‘Getting Smoked’ – Will China’s Economic Woes Impact the Rest of the World?

The situation has not gotten better for Evergrande over the past few months.  An analysis by the American Institute for Economic Research provides some up-to-date information regarding the Evergrande crisis.

The largest real estate developer in China—and one of the largest in the world—is on the brink of bankruptcy. The problems this could create in the Chinese financial sector, and in turn in other parts of the world, are convulsing capital markets around the globe. The news is not encouraging. Evergrande has already defaulted on several interest coupons on its dollar debt, and recently the listing of its shares was suspended on the Hong Kong Stock Exchange…

…The accumulation of debt to suppliers has caused serious problems for Evergrande. Most vendors have decided to stop supplying the company, so many real estate projects are completely paralyzed for lack of supplies. Evergrande’s ability to deliver new housing projects (crucial for the company’s survival) has been seriously compromised, as the company itself acknowledges in its latest quarterly financial report…

…Approximately 90 percent of Evergrande’s real estate developments are homes that are under construction (the other 10 percent is finished housing). According to Evergrande, the houses under development will be finished within a year, but housing sales are far below the number of properties in the company’s inventory.

The American Institute for Economic Research concludes that barring a miracle, Evergrande is very much on the path to bankruptcy.  This is not a surprise nor has it been for some time.

The bigger question will be what will Evergrande’s eventual financial collapse mean to China and the rest of the world.  It cannot be good.