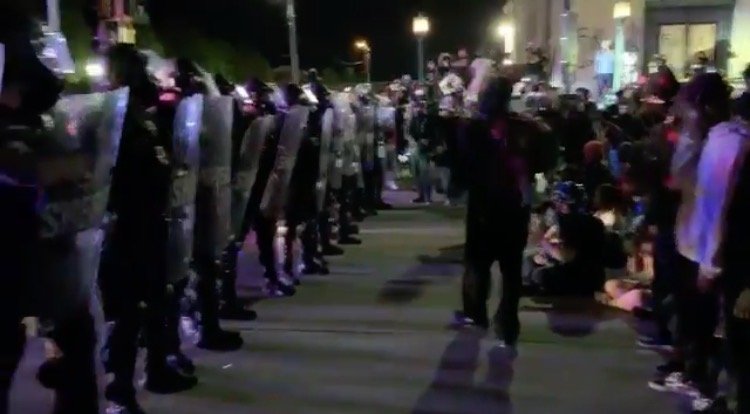 A Kenosha, Wisconsin furniture store was destroyed by an arson fire set during Black Lives Matter riots over the police shooting of Jacob Blake, August 25, screen image from video by Shelby Talcott.

Day 10 of the Kyle Rittenhouse trial began on Monday with each side presenting their closing arguments.

The 18-year-old is charged with double murder in the shooting deaths of two Antifa-BLM protesters last year during leftist riots that destroyed the Kenosha business district.

Earlier in the day, Judge Schroeder dropped Rittenhouse’s illegal possession gun charge in the latest blow against the state’s case against the teenager.

State prosecutors were the first to argue their side of the case – and just like the rest of the trial, their arguments lacked a certain substance… mainly evidence to back up their claims.

Throughout the trial, every piece of footage that has been introduced into evidence has backed up Rittenhouse’s claim that he acted in self-defense – Kenosha County Assistant District Attorney Thomas Binger had no choice but to try and convince the jury not to believe ‘their own lyin’ eyes.’

Binger shamelessly argued that the violent mob of rioters and looters who chased Rittenhouse through the streets of Kenosha should actually be hailed as “heroes” who “did the right thing,” because they were brave enough to attack Rittenhouse despite him having a weapon.

He also compared Rittenhouse to an active shooter or a bank robber who shot his way out of a crime scene, while singing the praises of the violent thugs who chased Rittenhouse and attacked him once he fell down on the street.

Absolutely disgusting – Keep in mind, this guy is arguing on behalf of the STATE.

“When is it reasonable for a criminal to shoot himself out of a crime scene? When a bank robber robs a bank – and runs away and the crowd comes after him – can he just shoot anybody and claim self-defense?

If someone comes up to that person and tries to stop them – tries to disarm them – like Anthony Hueber did. Do they forefit their life? Did Anthony Hueber forfeit his life by trying to be a hero by stopping an active shooter and trying to protect others.

Every day we read about heroes that stop active shooters – that’s what was going on here.

Prosecutor refers to the mob as “heroes” who did “the right thing” pic.twitter.com/SJySkA1S62

Binger’s closing arguments were such a clown show that he ended up just trying to throw the constitution out the window completely, arguing that Rittenhouse should lose the right to self-defense because he is the one who had a gun.

Rittenhouse Prosecutor Thomas Binger’s Closing Argument: “You Lose the Right to Self-Defense When You’re the One Who Brought the Gun” (VIDEO)

Rittenhouse’s defense team is making their closing arguments this afternoon. Jury deliberations and a final verdict should be expected sometime later tonight, or tomorrow.