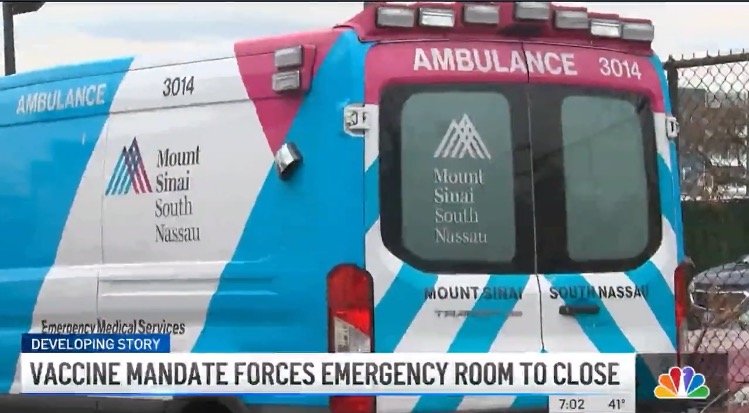 Democrat vaccine mandates forced the ONLY emergency room in Long Beach, New York to shut down this week.

The Mount Sinai South Nassau ER was forced to close on Monday due to staffing shortages as a result of New York’s vaccine mandate.

Patients will be redirected to a hospital in Oceanside which is more than 20 minutes away from Mount Sinai South Nassau.

The Mount Sinai South Nassau-operated Long Beach Emergency Department was forced to close Monday afternoon due to nursing staff shortages occurring as a result of the state vaccine mandate, according to the hospital.

The hospital said that the staffing shortage and subsequent closure is a result of the hospital’s compliance with the NYSDOH’s mandate issued Thursday which requires the suspension of any staff working under temporary religious exemptions who cannot show proof of receiving a first dose of COVID-19 vaccination or a valid medical exemption from receiving it.

The New York State Department of Health (NYSDOH) was notified of the need to close the free-standing Long Beach Emergency Department (LBED) on Friday and granted verbal approval, according to Mount Sinai South Nassau. The emergency department, which sees about 10,000 visitors annually, will be closed for at least a month.