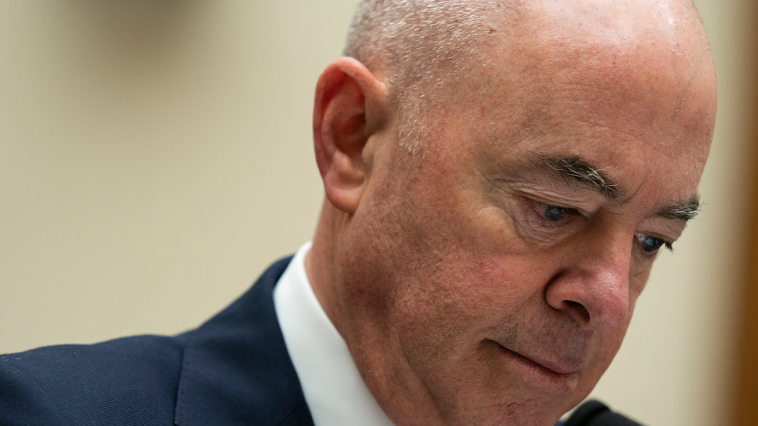 The Department of Homeland Security is in the political cross-hairs of both Republicans and Democrats over the shipping of illegal immigrants from Texas and Florida to sanctuary cities in the northern U.S.

GOP lawmakers are demanding answers from DHS Secretary Alejandro Mayorkas over recent reports that federal officials are assigning permanent addresses for illegal immigrants who arrived in Martha’s Vineyard that are the addresses of homeless shelters around the country. Republicans worry that this practice helps legitimize illegal immigrants – many of whom have no actual address in the U.S. – and could make it harder to process their claims for asylum and possibly remove them later, particularly if they are not actually located in those shelters.

“I will be demanding answers from DHS about reports from Martha’s Vineyard that federal agents assigned random homeless shelters across the country as the mailing addresses of illegal migrants, even after the migrants told them they had no address in the U.S.,” said Sen. Marco Rubio, R-Fla.

House Democrats want DHS Secretary Alejandro Mayorkas to launch an investigation into the movement of migrants from red states to Democratic enclaves.  (AP)

Mayorkas and his staff are also under attack from Democrats who want DHS to investigate the shipment of migrants from red states to heavily Democratic enclaves in the north.

“The exploitation of asylum seekers, refugees, and other immigrants contradicts the values of our nation and the priorities of the Biden-Harris Administration,” 27 House Democrats wrote in a letter to DHS Secretary Alejandro Mayorkas. “Reports from migrants describe being lured onto trips with promises of immediate assistance and expedited processing.”

“DHS must not participate in this malicious scheme that undermines the integrity and purpose of our immigration system,” the lawmakers wrote.

In recent months, more than 10,000 illegal immigrants have been shipped north by Republicans governors in Texas, Florida and Arizona.

Gov. Greg Abbott of Texas has sent migrants by bus from the U.S.-Mexico border to sanctuary jurisdictions like Washington, D.C. and New York City. Florida Gov. Ron DeSantis has flown migrants from Texas to the wealthy Massachusetts enclave of Martha’s Vineyard.

In recent months, more than 10,000 illegal immigrants have been shipped north by Republicans governors in Texas, Florida and Arizona. (John Moore/Getty Images)

House Democrats claim the relocations make it difficult for illegal immigrants to know their final destination, let alone an address where they can receive documents for court hearings. As such, the lawmakers want DHS to slow the deportation process for illegal immigrations relocated from southern locales.

“Because the arrival cities are often unknown to migrants, mailed legal correspondence, such as court dates, and locations of immigration hearings are inaccessible, placing them in jeopardy,” they wrote. “This dynamic is a result of a calculated decision to prevent proper notification and subvert legal proceedings.”

DHS did not respond to requests for comment on this story.