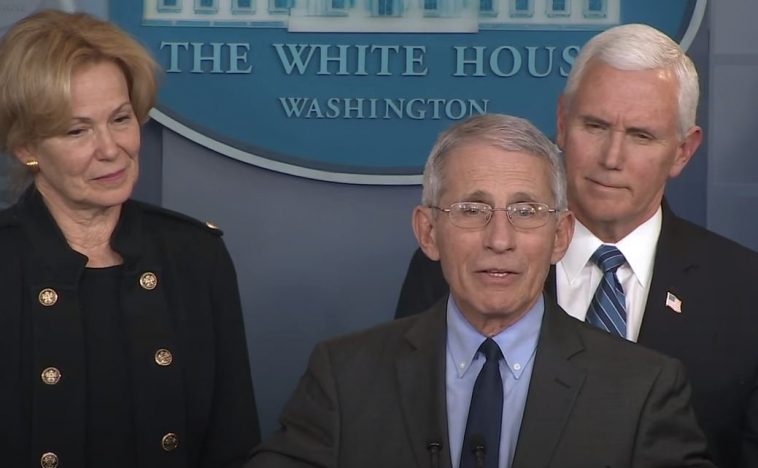 Doctors Fauci and Birx did all they could to overthrow the Trump Presidency through insane COVID policies.  Luckily they had Mike Pence to offer them cover.

The Daily Mail reports that Dr. Atlas is coming out with a new book in a couple of days discussing his time at the White House working with crazy and corrupt doctors Fauci and Birx.

Strict lockdowns pushed by White House advisers Drs. Anthony Fauci and Deborah Birx failed to stop the vulnerable dying from COVID-19, while families suffered and children lost out on their education, according to a forthcoming book by Trump adviser Dr. Scott Atlas…

…A Plague Upon Our House: My Fight at the Trump White House to Stop COVID from Destroying America,’ is published on November 23 by Bombardier.

‘People were dying from the virus, and the lockdown policies were not preventing the deaths,’ he writes in a copy obtained by DailyMail.com

‘The simple logic of assuming you could stop the spread of, and some said eliminate, a highly contagious virus by shutting down society after millions had been infected was worse than nonsensical.

‘The idea of stopping all businesses and closing schools while quarantining healthy young people at little risk from a disease in order to protect those aged seventy and over – that is simply irrational.’

Dr. Atlas goes on to discuss what it was like when he first arrived.

Not only were their lockdowns harming the economy, he says, but they failed to protect America’s most vulnerable people.

‘By the time I arrived, lockdowns had already been implemented throughout the country for months—including strict business restrictions and school closures as well as quarantines of healthy, asymptomatic people,’ he writes.

‘Those lockdowns were continually pushed, successfully, by Drs. Fauci and Birx to nearly all governors and throughout the media.

‘Those policies – the Birx-Fauci lockdowns – were widely implemented, and they were destroying America’s children and families.

Atlas goes on to point out VP Pence’s actions as the leader of the task force.

‘The closest advisers to the president, including the VP, seemed more concerned with politics, even though the task force was putting out the wrong advice, contrary to the president’s desire to reopen schools and businesses.’

The result, he says, was dangerous and confusing mixed messaging from the White House.

Fauci and Birx have proven their hate for President Trump.  Their efforts to destroy America using COVID as the backdrop are now legendary.  VP Pence’s efforts are not surprising as well after he came clean on January 6th as a Trump and America hater by certifying fraudulent elections across various swing states and giving corrupt and senile Joe Biden and his communist allies the election steal they so desperately wanted.

If history is fair, doctors Birx and Fauci will go down as criminals allowed into the White House to destroy the economy in another effort to overthrow President Trump’s Administration.  Pence will go down as the man who offered them cover.