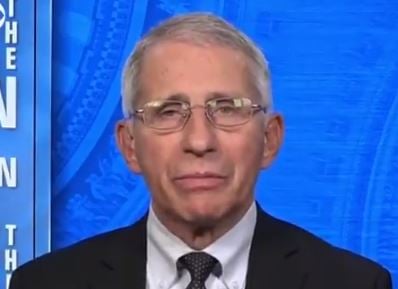 Masks are only for the peasants.

Dr. Fauci was spotted maskless at a book signing party in DC in violation of Mayor Bowser’s mask mandate.

According to Politico, Fauci was wandering around maskless for the most part but would put his mask on depending who he was around.

This is the same guy who says your child should wear a mask for seven hours a day at school.

When confronted about his decision not to wear a mask indoors, Fauci said, “I just decided that if anyone came up that I didn’t know, I would put my mask on.”

As gawkers tried to snap pictures of him indoors not wearing a mask, America’s doc would put it on and take it off depending on whom he was around. SALLY QUINN — who’s known Fauci since his days as a young NIH doctor, when he inspired a love interest in one of her erotic novels — asked him why he was at a party with a mask in hand, not on face. “I said, ‘You seem pretty ambivalent about your mask’ because no one else was wearing one,” Quinn told Playbook. “He said, ‘I just decided that if anyone came up that I didn’t know, I would put my mask on.’”

Quinn added that “paparazzi” were surrounding Fauci trying to get that “gotcha moment” of the Covid czar without a mask on. Guests had to show proof of vaccination to enter the party. “He was being safe,” Quinn said in his defense. “He knew everyone was vaccinated. If it was someone we knew, he would trust them, and if it was somebody else, he didn’t.” Another guest observed Fauci’s mask on/mask off dance, but said that the mask was firmly on when he came to the rescue of a guest who had collapsed. We reached out to Fauci via NIH but didn’t hear back Thursday night.

In Playbook: Fauci out at a party at Cafe Milano maskless, prompting Sally Quinn to ask why he was so “ambivalent” https://t.co/fsjwYcU7xS pic.twitter.com/CMOtPqqshb