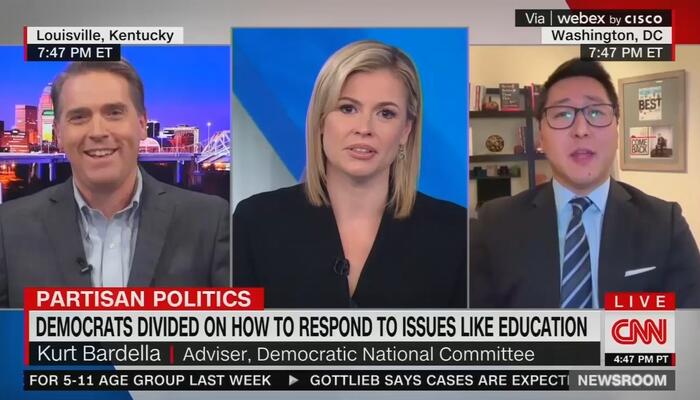 Appearing as a guest on Sunday’s CNN Newsroom with Pamela Brown, former MSNBC contributor Kurt Bardella was like a fish out of water as he appeared outside of his former safe space and was actually challenged by a conservative panel member on his typical trash talk of Republicans.

Bardella — a USA Today and L.A. Times columnist who is now also an advisor to the Democratic National Committee — accused Glenn Youngkin of using racism in his campaign for Virginia governor. In spite of all the evidence that Critical Race Theory has had a presence in some Virginia schools, the former MSNBC contributor declared:

He then used the tired “bunch of white people” jab against the Founding Fathers as he essentially argued in favor of Critical Race Theory:

When Scott Jennings — one of the few conservatives who still works as a contributor for CNN — had his turn to respond, he argued that parents know what their children are being taught, and took a shot at Bardella’s lame arguments by mockingly endorsing him to be the Democratic Party’s spokesperson:

This rare takedown of a liberal spinmeister on CNN which needs to happen more often was sponsored in part by Dell and Zales. Their contact information is linked. Let them know how you feel about their support of such programming.

KURT BARDELLA, USA TODAY COLUMNIST/EX-MSNBC CONTRIBUTOR: But there is zero doubt that Republicans like Glenn Youngkin used the invented issue of Critical Race Theory to try to scare the crap out of parents. Hey, it clearly worked — there’s no denying that. It’s a playbook that Republicans have washed, rinsed, rinsed and reused time and time again on a number of issues using the issue of race as a weapon. It is pure racism masquerading as a policy debate because, as you pointed out, Critical Race Theory is not in any K-12 school in America.

There is no teacher out there that’s trying to force people and students to think that there’s something wrong with them because they’re white. But we also cannot ignore the reality that our country was founded by a bunch of white people — privileged, rich white people — and that has colored the way our system has been set up, which is why there are so many black spots in our education and in our justice system. This is just a reality — it’s a fact.

But there is truth to the reality that Democrats need to understand how you talk to people about education. And I want to tell you something: If in the aggregate Republicans want to make every election going forward about education — about who’s most interested in teaching our students — in funding our schools — in narrowing the achievement gaps, we are happy to have that debate because, time and again, Republicans are the ones who are voting against measures that would improve education in America — that would pay teachers more.

PAMELA BROWN: I got to get Scott in here to reply.

BROWN: Hold on, hold on, hold on, really quick. Kurt, hold on one second, and I’ll give you a second to say your peace. Really quick, Scott, are you wrapped up? Because I’ve got to get Kurt in to respond to that.

JENNINGS: Hey, look, here’s the deal. Republicans, for the first time in my political career, figured out that education matters to voters, and they were able to talk about it in a way that met voters where they were. Democrats, on the other hand, figured out how to throw in with the teacher’s union and all the, you know, the education people who want parents to be treated like common criminals in school board meetings.

JENNINGS: Okay, quickly. I got to get Kurt in because we are running out of time. Kurt, Scott made some serious claims there, so go ahead, Kurt.