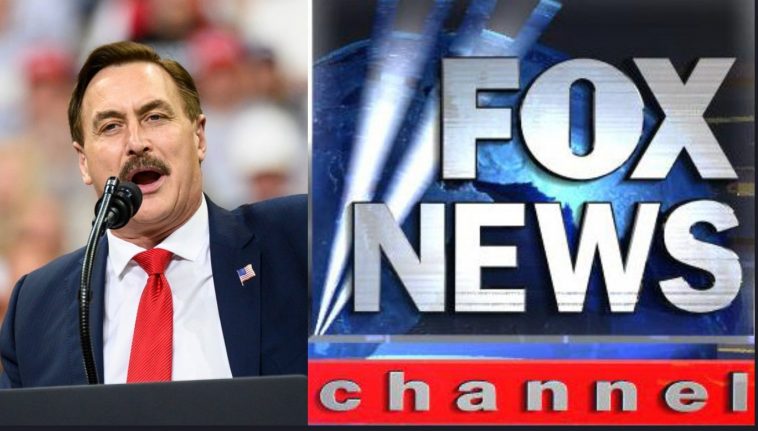 Mike Lindell and outraged patriots are boycotting and protesting Fox News for manipulating the public with lies about the election, “the China virus” and vaccines.

Fox News continues to herald itself as “fair and balanced,” but in reality has become nothing more than a wolf in sheep’s clothing and a dangerous accomplice of the mainstream media, the My Pillow CEO told the Gateway in an exclusive interview.

“Fox is the worst problem we have with media in this country. We know where the other media comes from. Fox refuses to report anything on the flagrant theft of the 2020 election — all the crimes — they don’t report anything related to medications that treat for the China virus,” Lindell argued. “They won’t talk about vaccines are voting machines. They are not on our side. They are controlled opposition.” “Fox is 100 percent controlled opposition,” he insisted. “They are not our friends anymore.”

Protesters holding “Help Save Our Country” signs began to amass in front of the News Corp. building in frigid 35-degree weather at 8 am on Wednesday to protest the so-called “Fair and Balanced” network for skewing and withholding the truth from the American people.

The Fox News Channel garners the highest ratings on cable news thanks to its loyal, primarily conservative-leaning viewership.

Yet, the network is engaged in “election deflection,” continuously omitting coverage that proves the 2020 election was irrefutably stolen and withholding critical information about Covid -19 and the deadly effects of the experimental mRNA “vaccine,” Lindell continued.

“When they don’t talk, people think everything is okay with the 2020 election. When they cover the 2020 election, they are doing what I call ‘election deflection.’ They decided to start covering the criminality of Hunter Biden’s laptop back in November — when it was too late,” he said. “They needed to talk about the election crimes — with the machines, with the hacks, with the audits that were conducted in all 50 states — they still to this day won’t talk about it!”

Attorneys general from 50 states have joined Lindell in filing a complaint with the Supreme Court, demanding the high court address substantial evidence of election fraud after months of gathering iron-clad proof Joe Biden and the Democrats hijacked and stole the election in 2020. Lindell and a slew of attorneys and analysts will present the fraud throughout a 4-day long Thanks-A-Thon at Frankspeech.com.

Ironically, Ameria’s highest-rated cable news network refuses to cover the complaint and refuses to give airtime to the attorneys general or Lindell.

“The attorney generals are doing a Supreme Court complaint. You can read the complaint at FrankSpeech.com. They have not signed it or filed it yet, but we have a copy of it –Fox isn’t going to report any of this. That’s the problem we have with Fox News,” Lindell explained. “I tell patriots, ‘Don’t go Fox on me, don’t go silent on me’ — that’s what they do. Fox couldn’t even be a weather channel because they won’t report an oncoming storm if they so chose not to. They are doing more damage than all the CNNs and MSNBCs combined — at least we know where they others are coming from.”

Anyone that continues to work at Fox, a network that, at best, lies by omission, is complicit in the mainstream media’s anti-American propaganda campaign, Lindell warned.

“Shame on Fox. Shame on all the people we trusted over there. Sean Hannity, Laura, Tucker, Judge Jeneane — all of them — they think that they are better off staying there talking about stuff that doesn’t mean anything just because they think that being there is better than not being there at all. The people, we trusted them to get the word out, that’s why they can do this massive cover-up of the election crimes. It’s the biggest cover-up for the biggest crime in history.

Big Tech and the mainstream media, especially the Fox News Channel are beholden to Deep State and Big Pharma and are doing everything in their power to swindle the American people from learning the truth about the 2020 election and Covid-19 with sweeping and unprecedented censorship and smear tactics, Lindell warned.

“Fox, just like CNN and MSNBC, refuse to cover the truth about the 2020 election or about the therapeutics that work for Covid or the lies about the vaccine. Fox News is sponsored by Big Pharma just like the others, so we can trust anything they tell us about the China virus and vaccines. A year and a half ago, when all these different therapeutics came out that effectively treated the China virus, they suppressed all that too.”

But the attacks on Lindell and Trump supporters are backfiring and opening people’s eyes like never before.

“I get attacked every single day by the media,” the billionaire philanthropist said. “But at least I am able to get the word out because when they attack me they announce what I’m doing. Last night, Jimmy Kimmell attacked me last night and said ‘Mike Lindell is having a 96-hour Thanks-A-Thon to talk about his ‘conspiracy theories’ about the 2020 elections,” Lindell said. “But he is still getting the word out that we are doing it. But Fox won’t report anything. The terrible media on the left just attacks and then goes silent on the issues of the day. And then you have Fox, which is the worst.

“All the election fraud evidence pouring out over the last nine, ten months –Fox has not reported one thing on it! That’s why we’re protesting there today, which will be all day. When you rely on an outlet like Fox News to report the truth, we are very much in trouble. I compare it to a Republican — your terrible  Doug Duceys and Brad Raesenbergers–  why are they such obstructionists? They obviously don’t have a party agenda which means they are compromised, have a personal agenda — something is going on. Fox has a knee-deep agenda otherwise they would be reporting these things, they would be reporting the election crime. They would be reporting all those things that they don’t report. They used to report. Now, they have a lift in front of them, they can’t report on issues that they are not ‘supposed to.’

To preserve the First Amendment, save America and human freedom as we know it, we must turn off the fake news matrix and elevate alternative uncensored outlets, Lindell concluded.

“”Fox is horrible — what they’ve done to our country is horrible.” Frankspeech.com will be the voice of the country, where we can speak out. We have hundreds of platforms there now,” he said. “All these people that have been deplatformed over on YouTube and Vimeo and all these places, they now have a home and we are going to speak out as one voice. Right now, if you don’t have a voice, you have nothing and that’s what they are trying to do to us.