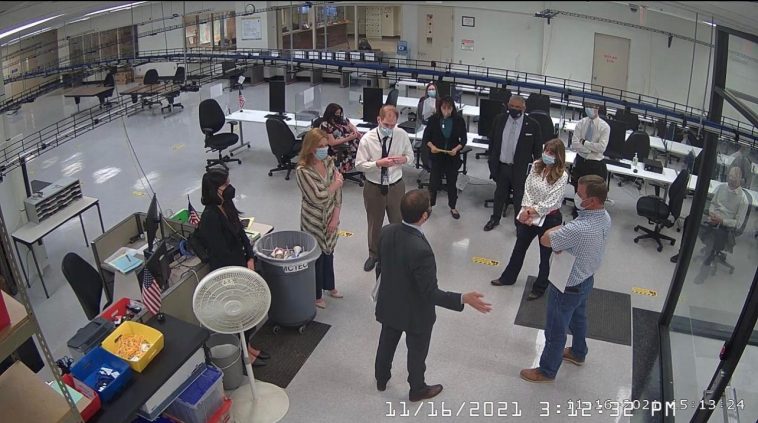 In the next photo, Jarrett and Valenzuela can be identified more clearly below.

Crooked Secretary of State Katie Hobbs also appears to be pictured in a red sweater. The next photo below appears to show Maricopa County Board Chairman Jack Sellers wearing a grey coat, to the right of a possible Secretary of State Katie Hobbs wearing a maroon sweater. Reynaldo Valenzuela and Scott Jarrett also appear in this photo on the right It is unclear what they are examining.

One woman in the photo appears to be recording with her cellphone.

Katie Hobbs, Stephen Richer, Jack Sellers, Reynaldo Valenzuela, and Scott Jarrett appear to be photographed at MCTEC on November 16th at about 2:30 p.m. This must be radical leftist Katie Hobbs. It is unclear what was taking place during this meeting and who the others are.

We The People AZ Alliance recently sent hundreds of FOIA requests to Maricopa County in relation to election fraud and attempts to derail the Arizona audit.

Are they scrambling to find out what needs to be deleted?

The Gateway Pundit called MCTEC for information about this meeting but the receptionist had no clue that a meeting took place or what transpired.

No public notices appear to have been made about this meeting.

No social media posts appear to have been made.

Why did elections officials hold this mysterious meeting and what are they planning?

Was this meeting a violation of open meeting laws, that were intended to prevent secret decisions from being made?

What is Maricopa County doing in such secrecy?