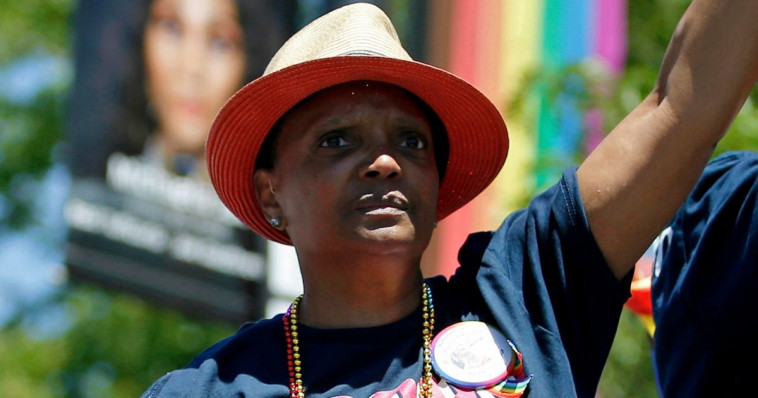 Terrell suggested that Lightfoot’s profane rant — where she shouted “F*** Clarence Thomas!” during an LGBT “pride” event — was essentially a dog whistle inciting left-wing violence against the conservative justice.

WARNING: The following video contains vulgar language that some viewers may find offensive.

Terrell said Lightfoot and others on the left are pushing violence against the court, citing the plot to kill Justice Brett Kavanaugh earlier this month.

“Using the F-bomb as a sitting mayor, and looking at what happened with the attempted assassination of Justice Kavanaugh, they’re trying to divert anger at the Supreme Court justices,” he said. “And they picked Clarence Thomas. He didn’t even write the lead opinion.”

Terrell said Lightfoot is noisily focusing on abortion to deflect attention from the ongoing, terrifying crime waves roiling her city.

“You know what this is? This is a lie and a distraction from the crime that is going on in Chicago. … She’s trying to use this as a distraction. It’s insulting,” he said.

As a reminder, 24 people were shot and five died in violence over the weekend in Chicago, which has among the strictest gun control laws in the country.

As usual, most of the victims and the perpetrators were black, yet there was little left-wing outrage over the loss of these black lives.

Chicago has had a Democratic mayor for the past 91 years as crime and murder rates spiked to the alarming proportions we now accept as “normal” for the liberal city.

Thomas and Kavanaugh aren’t the only justices who have been targeted in recent weeks.

Are you worried for the safety of conservative SCOTUS justices?

Leftists surrounded the home of Justice Amy Coney Barrett (who has seven children) in an attempt to threaten her ahead of the Supreme Court’s abortion ruling on Friday.

Last month, Justice Samuel Alito and his family were forced to move to an undisclosed location following a barrage of left-wing threats.

These menacing incidents spotlight once again that when it comes to any major issue, today’s unhinged left always misses the forest for the trees.

Leftists are rioting and hyperventilating over the Supreme Court’s correct decision to relegate abortion as a states’ rights issue pursuant to the 10th Amendment of the U.S. Constitution.

We’ve got mass casualty events due to Biden’s border policy; we’ve got an inflation-ridden economy and gas over $5; we’ve got no exit plan in Ukraine. And the media are convinced that angry blue staters who will still be able to obtain abortions will swing 2022 Democrats’ way.

If Democrats actually cared about the plight of everyday Americans, they’d focus on countering inflation and deterring crime. But they don’t.

The hallmark of today’s leftists is a toxic embrace of irrational extremism, knee-jerk violence and a cavalier rejection of science. That’s why it’s almost impossible to reason with them.

That’s also why they focus on esoteric issues while ignoring the practical problems that Americans struggle with every day.

If you’re not convinced, do this little experiment: Ask people you know whether they’ve been directly impacted by last week’s Supreme Court decision. Then ask them if they’ve been affected by runaway grocery and gas prices.

The responses you get will give you a clear picture of what the nation’s priorities should be right now.

Samantha Chang is a politics writer, lawyer and financial editor based in New York City.

Samantha Chang is a politics writer and financial editor based in New York City.

Love this sentence. “If you’re not convinced, do this little experiment: Ask people you know whether they’ve been directly impacted by last week’s Supreme Court decision. Then ask them if they’ve been affected by runaway grocery and gas prices”. I’m afraid that libs won’t like the responses.