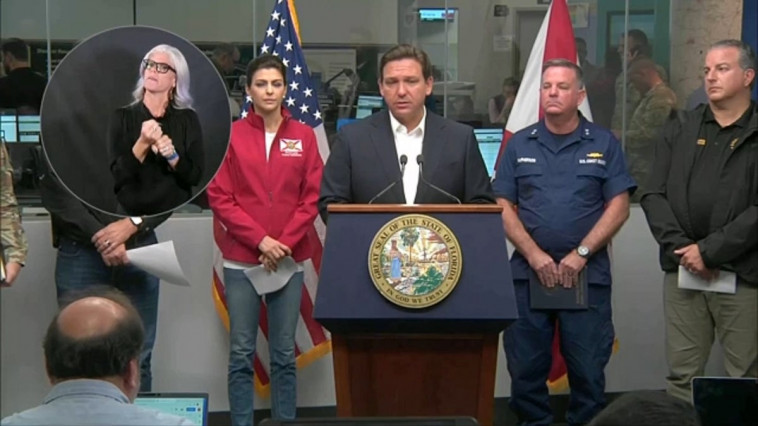 Florida Gov. Ron DeSantis issued a stern warning to those trying to take advantage of the victims of Hurricane Ian.

DeSantis made the comments Friday during a news conference in Fort Myers, Florida. He said that while visiting nearby Punta Gorda, he saw a boarded-up business with a sign that read, “You loot, we shoot.”

“We are a law and order state, and this is a law and order community,” DeSantis said. “So do not think that you’re going to take advantage of people who’ve suffered misery.”

“Don’t even think about looting,” he said during another press conference later in the day.

“I can tell you in the state of Florida, you never know what may be lurking behind somebody’s home,” he said. “And I would not want to chance that if I were you — given that we’re a Second Amendment state.”

Ian made landfall in Florida on Wednesday, and nearly 2 million people remained without power as of Friday afternoon.

The hurricane made landfall as a powerful Category 4 storm, with maximum sustained winds reaching 155 mph.

Lee County Sheriff Carmine Marceno also said that he “will not tolerate” anyone trying to take advantage of people suffering as a result of the storm’s damage.

“We are not going to tolerate, I mean, zero tolerance when we say anyone that thinks they’re going to thrive on the residents of this county or state when we just took a horrific hit — I can guarantee you that is not going to happen,” Marceno said.

He said there will be “swift incarceration immediately with no tolerance.”

Twenty-one deaths have been reported throughout Florida after Hurricane Ian went through the state, according to FOX 35, but officials say the number is expected to rise.

On Friday afternoon, Ian made landfall near Georgetown, South Carolina. The National Hurricane Center downgraded it to a post-tropical cyclone.