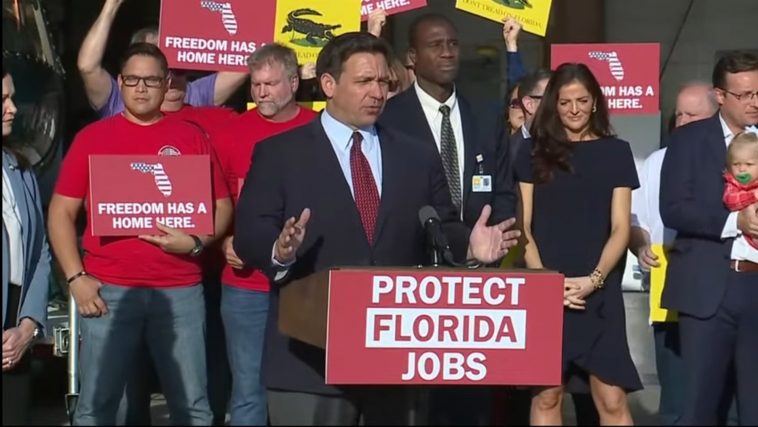 Florida Governor Ron DeSantis has called state legislators to come together next week for a special session to consider several proposals that push back against Biden’s authoritarian COVID-19 vaccine mandates for workers and employers.

The main piece of legislation being weighed is a proposal to decide whether the state should withdraw itself from the partisan oversight of Biden’s Occupational Safety and Health Administration (OSHA). The measure was introduced earlier this month and sponsored by Republicans Sen. Travis Hutson and Rep. Ardian Zika after OSHA had finally issued its Emergency Temporary Standard relating to Biden’s vaccine mandate for businesses with 100 employees or more.

The Republicans hold the majority in both chambers of the Florida state legislature, so it looks likely that the proposal will pass easily. The GOP leaders of both the House and Senate have even already indicated that they intend to kick OSHA’s authority to the curb.

House Speaker Chris Sprowls (R) made his support for withdrawing from the federal agency very clear in a press conference earlier this week, saying that Biden’s administration had “weaponized” its authority in order to hold noncomplying businesses and individuals “hostage.”

From Sprowls’ statement to the News Service of Florida:

“If OSHA, the Department of Labor and OSHA, is going to be weaponized as a way to hold hostage businesses throughout the state of Florida, no problem. We want a different plan.

We want out of OSHA. We’ll submit our own regulatory authority and say goodbye to the federal government.”

Florida Senate President Wilton Simpson (R) also confirmed his support for the measure in a prepared statement in which he called OSHA’s actions an “unconstitutional mockery:”

“After 40 years in the private sector running businesses that depend on an in-person workforce, where significant safety risks have to be mitigated, I am shocked to see such an unconstitutional mockery of the important role of OSHA.”

If the Florida legislature agrees to the measure that would withdraw the state from OSHA’s oversight, it would be the “first step” of many more that are needed to fully separate from the agency and make the process official. According to a report by the NSF, the timeline to get out from underneath OSHA’s authority “could take several years.”

The separation from OSHA may not be completed anytime before Biden’s mandate for businesses kicks in on January 4th, but the legislation’s special session will also decide on several other proposals that will provide robust protections for workers and businesses against Biden’s crippling federal overreach.

Some of the other proposals that will be discussed by lawmakers next week include: preventing government employees from being forced into vaccination, requiring employers to allow vaccine exemptions for workers, prohibiting the state’s surgeon general from forcing anyone to get vaccinated against their wishes, giving parents the sole authority over vaccination status and mask-wearing by their children in schools, and giving workers the ability to sue over vaccine mandates, among other important measures.

Florida’s legislature – thanks to decisive action by Governor DeSantis to call a special session  – is demonstrating to the rest of the republican states in the nation that they are taking the fight against Biden’s federal overreach extremely seriously – they have already been right about resisting lockdowns and other authoritarian measures to limit the spread of the virus – and now they are leading the way once again in the fight against the federal mandates.