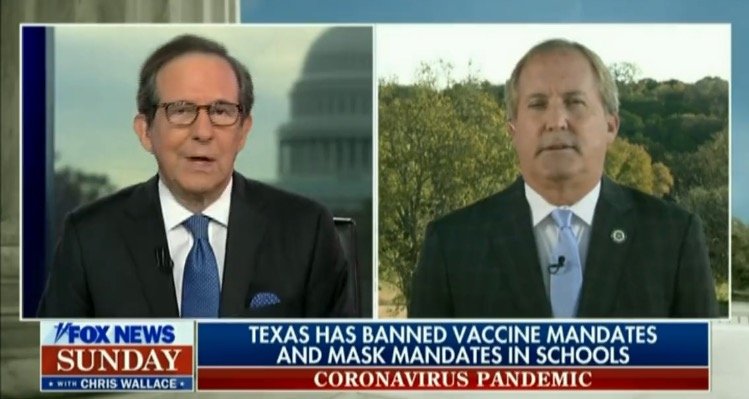 Ken Paxton is a hero.

Paxton sued the Biden Regime over its use of OSHA to force private businesses with more than 100 employees to either test workers or prove they are vaccinated.

On Friday the US Appeals Court for the Fifth Circuit upheld its decision to put a halt on Biden’s vax mandate for businesses with 100 employees.

Paxton celebrated the win on Friday as “a massive victory for Texas and for Freedom from Biden’s tyranny and lawlessness.”

Wallace told Paxton that his position on vaccine mandates is “not consistent.”

“You say Texas companies should take care of their own workers so, given that, how do you justify the governor of Texas, Greg Abbott, issuing an executive order that bans any business in Texas from issuing a vaccine mandate and how do you justify the governor issuing a ban on all school districts on mask mandates, a ban that was overturned just this week by a federal judge?” Wallace asked Paxton.

“So I justify it by the governor has the authority under state law in an emergency. And so he has done just that. Obviously, it’s his view that these mask mandates are unnecessary and that vaccine requirements are also unnecessary so it’s my job as the state’s attorney to go defend what he’s done and what the legislature has done and I’m perfectly comfortable doing that,” Paxton said.

Paxton pushed back again, “What I was trying to say in the clip is that the president does not have the authority to force companies. Obviously we have a stay in the Fifth Circuit to stop them from forcing companies to require workers from getting the vaccine or fired. What I’m saying to these companies is you don’t have to listen to him because he’s out there saying that you should do it anyway despite the fact that we have a stay from a higher court.”