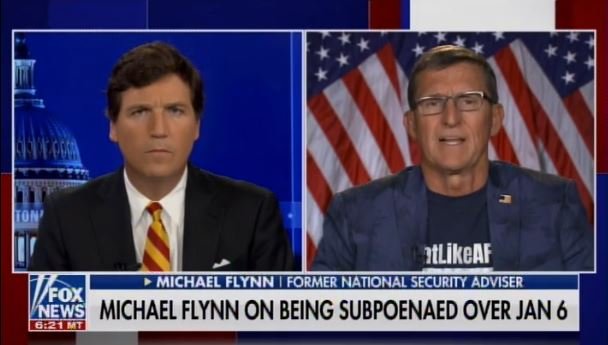 Flynn, who was persecuted by the deep state, Democrat Party, and fake news mainstream media for years was asked to comment on the increasing threat of the radicals in charge of government and their cohorts in the media and Big Tech.

Flynn described the current crisis as a continual loss in our constitutional freedoms.

General Michael Flynn: What I am not surprised at but I think Americans are surprised at, is the speed they are moving to do exactly what I said which is to take this country over.  And we can’t kid ourselves, Tucker.  That’s the direction that they are moving… The assault on our freedom of speech, our ability to peaceably protest the right to seek the truth in our elections, systems and processes.  This is all at risk in our country today.  And they don’t want us to be talking about these things…  The other big question, the 60,000 foot view, is when does this stop or is ever going to stop?  And I actually don’t see it stopping.  I actually think we are are going to continuously see this relentless pursuit  on what I am going to call our rights from top to bottom.  I actually advise everyone to go read the Bill of Rights because every single one of them is at risk under this particular regime that we are being dominated by… To me it’s this Republican establishment and these so-called Republican leaders.  What I hear from the American people is they are looking for leadership out of the Republican Party and the Republican Party, they’re not doing it. They need to stand up and they’re just not doing it.

Ain’t that the truth.  The Republican Party is completely worthless.