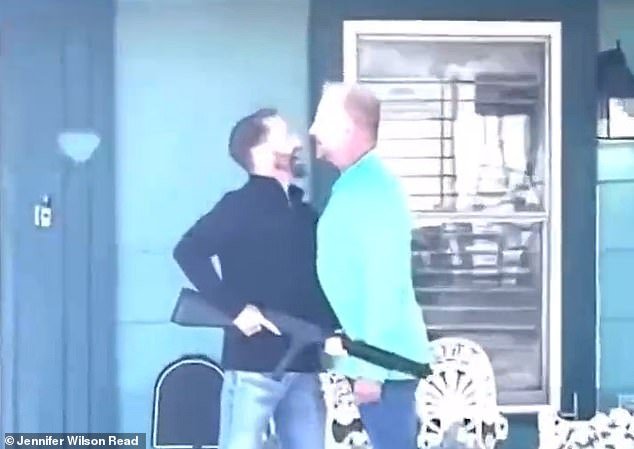 The Kyle Rittenhouse case shined a bright light on our Second Amendment and how it gives us the right to use a gun to protect ourselves from another person or people threatening our life.

100 Percent Fed Up – In Lubbock, TX, a similar situation will likely be headed to the courts after a deadly November 5 confrontation between a boyfriend of a mom her ex-husband with whom she shares custody of their child turned deadly on the front porch of the boyfriend’s home. Video footage taken from two different vantage points shows the boyfriend Kyle Carruth, and Chad Read, the ex-husband of Christina Read, in a heated argument over picking up their son from Kyle’s home.

The argument that took place on the front porch of Carruth’s home led to the shooting death of Chad Read after Read attempted to wrestle for the gun.

Daily Mail – The footage, captured by Jennifer Read from a car parked on the street outside Kyle Carruth’s South Lubbock home, shows Chad Read arguing with his ex-wife and Carruth.

Kyle Carruth – wearing a black top and jeans – is heard telling Chad Read to ‘get off of my property. Chad Read, who is wearing a teal top and jeans, gesticulates with his arms as Carruth turns around to go inside the house.

Chad Read turns around and continues talking to Christina Read, telling her that he wants his son, who he was supposed to have custody of from 3:15 p.m that day, according to Jennifer Read in an affidavit filed after the incident.

‘I’m supposed to have him at 3.15,’ Chad Read is heard saying to Christina Read. ‘But you’re playing games telling me that I have to pick him up at six?’ Carruth is then shown re-emerging from the house holding a firearm, which he’s holding down by his side, shouting ‘leave’ at Chad Read.

Chad Read is heard shouting back: ‘Use it, mother f***er,’ and squaring up to Carruth, threatening to take the gun from him.

Now face-to-face, Carruth fires one shot into the floor at the pair’s feet, which does not appear to deter Chad Read, who continues to push against Carruth.

Suddenly, Carruth jumps back away from the porch, raises the rifle, and fires two shots at Chad Read, who slumps to the floor.

Carruth walks back to the porch and turns around to face the camera. Still holding the gun, he wags his finger as Jennifer Read is heard saying, ‘I have it on video Kyle.’

‘I told all of y’all to leave,’ Carruth is heard saying, telling her that his son is not at the house. ‘None of y’all should be here; I asked you to leave. I did everything. I did not want to do any of this,’ he says.

KCBD reports – Guinn says Carruth holds a valid defense under the Castle Doctrine, “to defend himself, others or his property,” and they are looking forward to the Attorney General’s Office investigating and presenting the case to a Lubbock grand jury. Guinn says a grand jury could still indict Carruth, but his hope is “upon careful review of the law, they will not,” but it doesn’t mean he can’t be arrested and charged or convicted later.

“Everyone wishes there could have been an alternative solution, and it never would have happened. It’s affecting him too,” Guinn stated. “You know, we’re thinking about that poor 11-year-old stepson. And he’s just a kid stuck in the backseat of Chad Read’s truck, and Chad chose to drive out to the seven and a half-acre property. You know, it’s still playing through Kyle’s mind. And that is not an easy memory for anyone, even if, just because it’s legally right, doesn’t mean it’s not without psychological and practical consequence.”

A second video, filmed from inside the house, shows the same incident.

What do you think? Should Kyle Carruth be charged with the shooting death of Chad Read? Do you think his actions were justified?