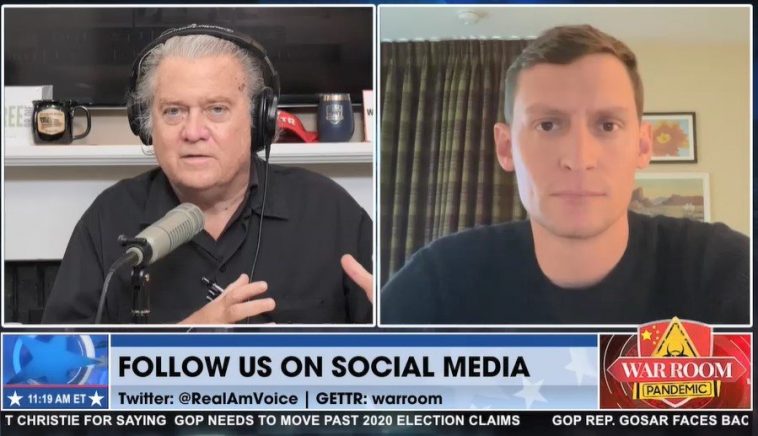 Blake Masters, a 34-year-old chief operating officer at investment firm Thiel Capital and native Arizonan, launched his campaign for US Senator from Arizona in July. Since his launch, Blake has appeared on several media hits including The Gateway Pundit and The War Room.

On Tuesday on The War Room Blake and Steve discussed the growing threat of the tech giant authoritarians.

Blake listed off five common-sense ideas on how to save America from these online tyrants.

1.) Take away the Section 230 immunity that is corporate welfare for Big Tech
2.) Make Facebook and Twitter common carriers – The phone company can’t kick you or me off for having a conservative conversation
3.) Google and Facebook should be broken up. No reason that they should have Facebook, What’s App, and Instagram so they can suck up your data
4.) We need comprehensive data privacy legislation – You own your data not giant international corporations
5.) Google can change elections via their search engine – is enemy number one when it comes to election integrity

These are excellent points that just make sense.
By the way— When you search BlakeMasters.com on Bing or DuckDuckGo the first search item that pops up is on car “brakes.”

And the BlakeMasters.com website is not even listed on the front page.
This is how the Tech Giants discriminate against conservatives.
(Google was actually better which was a surprise!)

** You can donate to Blake Masters here.

Blake Masters went on to say we have 10-20 years to deal with the Tech Giants before we lose our country.

The Gateway Pundit believes we have less time than that.

This was an excellent segment on The War Room.