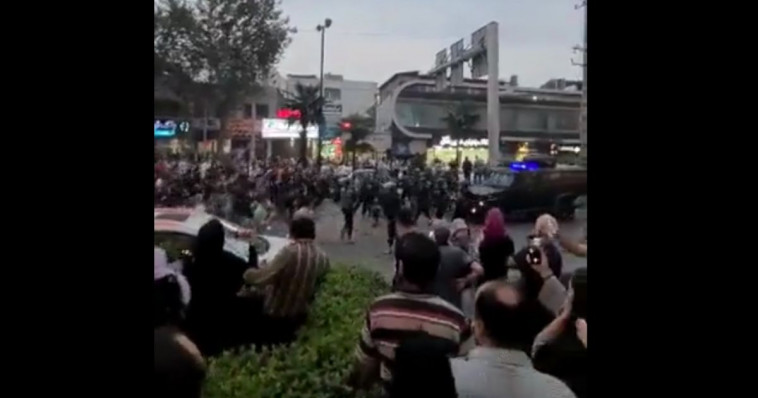 At least 11 people have been killed this month in Iran during protests following the funeral of woman who died in the custody of the country’s “morality police.”

But that’s only half of the story.

Video coming out of the Islamic terror-supporting nation seems to indicate that the protesters, despite the risks, may have the upper hand this time around.

Because of the regime’s stranglehold on information coming in and out of the country, it’s difficult to verify many of reports of protests in Iran. But the videos often seem to speak for themselves. In one, a crowd appears to attack a lone police officer; in another, a large group of authorities is pushed back by advancing protesters.

WARNING: The tweets in this commentary include violent content that some viewers will find offensive.

And less violent, but perhaps most revealing of the longing for freedom that is finding voice among Iranians, from Iranian-American journalist Masih Alinejad:

“Let me make it clear that Iranian women who are facing guns and bullets right now in the streets, they’re not protesting against compulsory hijab like just a small piece of cloth. Not at all,” Alinejad told The Associated Press.

Of course, there’s another battle playing out in Iran, one that’s not always visible to the naked eye.

Even mainstream publications have noticed the revival of Christianity in Iran over the past year or two, even in the face of extreme persecution by the radical Islamic regime.

Do you expect to see the end of the Islamic Republic of Iran in your lifetime?

And just as the Great Awakening had a powerful impact on American culture that contributed significantly to the American Revolution that set us free from the Great Britain of King George III, so might the flame of the Holy Spirit among so-called Muslim-background believers be refining a new desire for freedom in Iran.

Given that the BBC has estimated that Iran’s Revolutionary Guard boasts nearly 200,000 members, Iranians seeking change may have a long and bloody struggle ahead of them. Alinejad, however, predicts that the days of the radical Islamist government are numbered.

“Whether the regime cracks down on the protests, whether they shut down the internet, people of Iran won’t give up,” she told the AP. “The anger is there.”

George Upper is the former Editor-in-Chief of The Western Journal and an occasional co-host of “WJ Live,” powered by The Western Journal. He is currently editor-at-large. A former U.S. Army special operator, teacher and consultant, he is a lifetime member of the NRA and an active volunteer leader in his church. Born in Foxborough, Massachusetts, he has lived most of his life in central North Carolina.

George Upper, editor-at-large of The Western Journal, is a former U.S. Army special operator, teacher, manager and consultant. Born in Massachusetts, he graduated from Foxborough High School before joining the Army and spending most of the next three years at Fort Bragg. He now lives in central North Carolina with his wife and a Maine Coon named Princess Leia, for whose name he is not responsible. He is active in the teaching and security ministries in his church and is a lifetime member of the NRA. In his spare time he shoots, reads a lot of Lawrence Block and John D. MacDonald, and watches Bruce Campbell movies. He writes “The Upper Cut,” a weekly column that appears quarterly (more or less). He is a fan of individual freedom, Tommy Bahama, fine-point G-2 pens, and the Oxford comma.