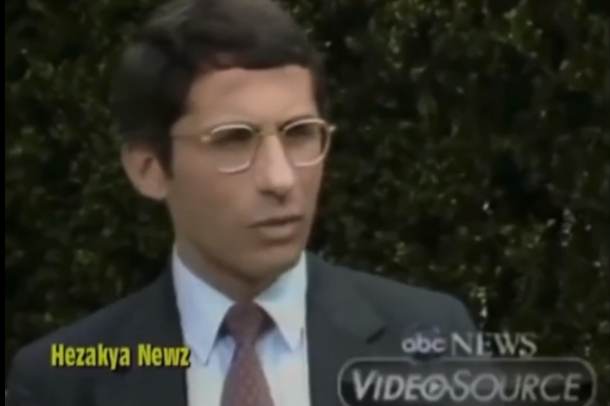 It’s like Déjà Vu.
In the 1980s during the height of the AIDS epidemic Dr. Fauci told Americans that children could catch AIDS from casual contact.

Of course, this caused a huge reaction from Americans towards gays and those suffering from the disease.

Fauci also withheld successful treatments from AIDS patients for over a year as THOUSANDS died.
He wanted a vaccine — that never came.

The Gateway Pundit posted this in April 2020.

Dr. Anthony Fauci, current director of the National Institute of Allergy and Infectious Diseases at NIH, in 1984. (Science Speaks)

** Dr. Fauci claimed that AIDS might be transmissible by “routine close contact.” (May 5, 1983, issue of the Journal of the American Medical Association). (Michael Fumento, The Myth of Heterosexual AIDS, p. 237).

** Dr. Fauci claimed that ten percent of the HIV/AIDS infected would be heterosexual—more than two and half times the rate – four percent – it actually was.

** On February 15, 1987, then conservative columnist George Will said to Dr. Fauci that HIV/AIDS was principally a homosexual affliction and that it was not exploding and Fauci quickly replied, “That’s not correct. The percentage of individuals who have gotten AIDS by heterosexual transmission is about four percent now. It is projected that that number will be up in 1991 to about 10 percent.”

This ten percent claim was a standard talking point of his. “We expect 10 percent of U.S. AIDS to be heterosexually transmitted by 1991,” he said, citing, Scientific References, Group I: The Epidemiology of AIDS. HIV/AIDS in the heterosexual community has never been more than four percent.

Which brings us to today–

NIAID Director Dr. Anthony Fauci is amassing quite a record these past three months.

** In January Dr. Anthony Fauci told Newsmax TV that the United States did not have to worry about the coronavirus.
Now, three months later, he wants to shut down every state!

** Dr. Fauci warned of an apocalyptic pandemic and later compared the coronavirus to a bad flu.

** Dr. Fauci based all of his predictions on models and then told reporters this past week, “You can’t really rely on models.”

And on March 20th Dr. Fauci “corrected” the president during a press briefing on hydroxychloroquine saying, “You got to be careful when you say ‘fairly effective.’ It was never done in a clinical trial… It was given to individuals and felt that maybe it worked.”

** Exactly two weeks later hydroxychloroquine was deemed the most highly rated treatment for the novel coronavirus in an international poll of more than 6,000 doctors.

But Fauci continues to withhold effective treatments and drugs from those suffering from the coronavirus to this day.

He wants an effective vaccine.

It is amazing that some people never change — No matter how many thousands of people they have killed.