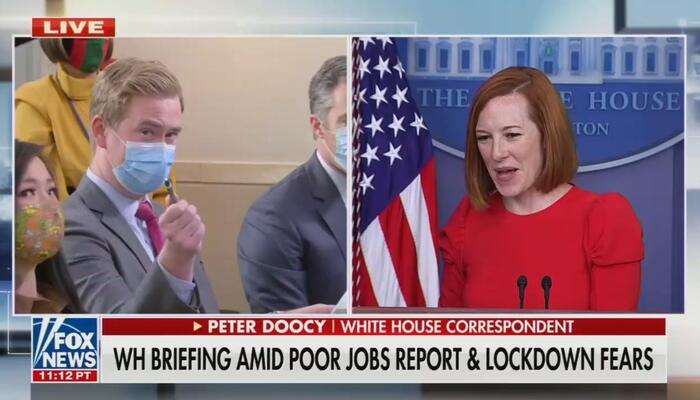 An ill President Biden served as a focus of Friday’s White House press briefing, so it was natural that Fox’s Peter Doocy was in the middle of it in questioning Press Secretary Jen Psaki on that as well as the Build Back Better (BBB) Act and China’s refusal to allow for a complete investigation into the origins of the coronavirus.

Similarly, Real Clear Politics’s Philip Wegmann drilled home the plight of Chinese Uighurs and Voice of America’s Patsy Widakuswara brought up new Chinese provocations against Taiwan. At the opposite end of the spectrum, others continued pushing draconian Covid mandates with one trumpeting an Orwellian move out of Germany.

Doocy led with BBB and specifically whether there was “any thought…to maybe waiting for Build Back Better until a month that you don’t have this big miss in the jobs report?”

Psaki quipped there were “a lot of things gathered into that question,” but she rejected the premise by returning to past White House talking points dismissing the CBO.

Doocy then moved to Covid and how, alluding to a call two weeks ago with Chinese President Xi Jinping, Biden “did not press him to help with the Covid origins investigation because you said that Xi just understands he’s supposed to be transparent.”

Simply wanting an update, Doocy was met with an incredulous Psaki hit back that she doesn’t “believe that’s exactly what I said” and, after answering, things took a sudden turn as she wanted to go back to crime as Doocy had asked about it on Thursday (click “expand”):

PSAKI: I believe what I said, is that we have pressed for this repeatedly. We will continue to and we’ll continue to do that at a range of levels. I don’t, unfortunately, have any updates on the participation or willingness of the Chinese to add and provide additional data. Can I provide one other update to you since you asked me about crime yesterday, and I have a little more information for you. Um —

DOOCY: About crime? My question was about Xi. It wasn’t about —

PSAKI: Well, you asked me a question about crime yesterday —

PSAKI: — a little extra information. I followed up for you, Peter.

PSAKI: So I would note what I — what I should have added yesterday, but I learned afterwards is that the Justice Department, the FBI, and the federal law enforcement have been in touch — in contact with jurisdictions where we have seen this high level of retail theft. So, for example, in Los Angeles, we — we’ve seen a rash of robberies. The FBI is providing assistance to a multi-jurisdictional task force led by the LA Police Department. I’d also note that, on top of that, the Department of Justice announced last week that San Francisco — were a number of high profile retail thefts have happened — will get money to hire 50 more police officers through the COPS program that the President has championed. That came as part of nearly $150 million in similar grants nationwide. So, just a few updates for you.

Doocy thanked Psaki and said he would “include that in our coverage,” but things got even more amusing when Doocy broke the fourth wall:

PSAKI: I look forward to seeing it on Fox later today.

DOOCY: It’s on Fox right now, I think. [POINTS AT THE CAMERA]

Following that detour, he ended with two questions about Biden’s cold (which he himself asked Biden about) and what seems to have been a double standard with Biden continuing to work even though “a lot of people in the workforce are encouraged not to go to work if they are exhibiting those symptoms, even if they are played vaccinated.”

Widakuswara and Wegmann eventually had their turns with the former wanting the administration’s thoughts on “an alleged Chinese submarine in the Taiwan Strait” and if they’re “preparing for any kind of potential increased Chinese provocations…in case Beijing decided to express their frustration ahead of the democracy summit.”

As we’ve come to expect, Psaki ducked the question, saying they’ve “always raised concerns about provocations or escalatory behavior,” but she would have to find out more.

Wegmann went next and he brought up the proposed Uighur Forced Labor Prevention Act in light of reporting from The Washington Post about administration efforts to undermine it.

Predictably, Psaki spun the interactions with Congress as not meddling or discouraging it in “any way, shape, or form” (click “expand”):

WEGMANN: You’ve been clear going back until at least September every time I ask about the administration’s position on the Uighur Forced Labor Prevention Act. You’ve said numerous times that the President doesn’t have a position. There’s new reporting in The Washington Post that, in October, the deputy secretary of state was telling lawmakers to slow the bill down. So is the administration on the same page and why does it seem that the deputy secretary of state were saying in private to lawmakers to slow this down while, in public, the White House has been saying that the president is neutral.

PSAKI: Well I wouldn’t say we’re neutral. I would say we share Congress’s concern about forced labor in Xinjiang and, in fact, have taken a number of concrete measures, as you know, on our own, including, but not limited to visa restrictions, global Magnitsky, and other financial sanctions, export controls, import restrictions, the release of a business advisory, and rallying the G-7 to commit actions, so I wouls say we are hardly neutral. We have strong concerns — serious concerns and we are absolutely not lobbying in any way against the passage of this bill. There are negotiations and discussions between members of Congress. The executive branch often offers Congress technical advice to make legislation effective and implementable by the agencies responsible. Those are the conversations that are happening, but we absolutely support and have been advocates for doing more to hold to put in place accountability here.

WEGMANN: You laid out a number of executive steps the President has taken and then also how he’s rallied the world. You know, at the G-7 on this issue. Does he want Congress to do anything additional? I mean, is he — he’s leading on the world stage. Is it going to lead in Congress in terms of actually getting something in the law?

PSAKI: There’s negotiations he fully supports between members of Congress, and he supports the objective of doing more here and, as is evidenced by the fact that we have done a great deal. We’re offering technical assistance. Again, we’re not lobbying against this bill in any way, shape, or form. That’s a normal part of the process in order to make sure we — legislation can be effective and implementable. That’s where the status of it is at this point in time.

Speaking of a laser focus, The Wall Street Journal’s Sabrina Siddiqui suggested the administration have major cities reinstitute mask mandates while encouraging more to follow what some have done in having “proof of vaccination to access indoor dining, bars, and other non essential businesses.”

Finally, longtime radio reporter Bob Costantini had the Germany question as a way of wondering about increasing vaccinations, quipping that “Germany has decided that unvaccinated people should not be allowed to go in public places” and “[t]hat may be a great way to incentivize people to be vaccinated” even though it’s likely “that would not fly in this country.”

To see the relevant transcript from the December 3 briefing, click here.