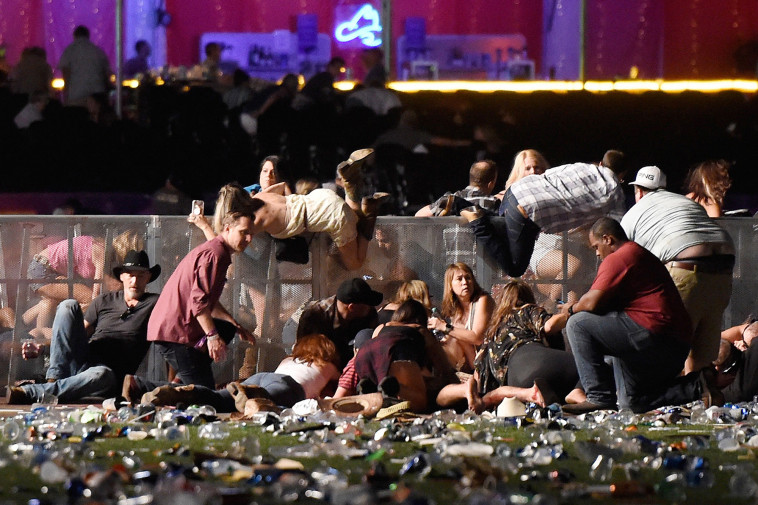 It was the final night of the Route 91 Harvest festival in Las Vegas.

Country superstar Jason Alden just finished a Facebook Live with my crew from SiriusXM behind the main stage before he would perform — and was the final artist of the three-day festival.

A few songs into his set, a lone gunman opened fire from the 32nd floor of the Mandalay Bay Hotel & Casino across the street, killing 58 people and wounding 869 — the worst mass shooting in US history.

Hundreds of us who were there are still scarred from that Oct. 1, 2017, massacre.

As the 11 minutes of bloodshed unfolded, Mandalay Bay went on lockdown. Brave officers faced the gunman on the 32nd floor while their heroic fellow cops tried to save festival goers on the ground — knowing they may not come out alive.

Gamblers in the hotel’s casino ran for their lives, and so did two of our SiriusXM colleagues.

Meanwhile, wild reports of more shooters caused chaos at other hotels along the Strip and triggered stampedes out of casinos and onto Las Vegas Boulevard.

Every little decision my SiriusXM colleagues and I made that night changed our lives forever.

I was on the fifth floor of the Mandalay Bay, trapped in my room and feeling caged as the shooter was on a rampage a few floors above. I had no idea if my SiriusXM colleagues were alive. To be honest, it may be that weed saved my life that night.

After we finished the final Facebook Live with Aldean, me and a few of my SiriusXM buddies smoked a joint to celebrate the end of our festival coverage before we started breaking down the set.

Normally we would be in the lounge for the artists, or backstage, or even on stage. But the marijuana slowed me down after three 15-hour days of Vegas heat and covering a music festival.

My SiriusXM colleagues who were on the ground with me — and are now mass shooting survivors — will forever hold a dear place in my heart. We all helped each other that night and the days, months and years afterward.

My plan had been to head back to the Mandalay Bay, order room service, put money on the Philadelphia Eagles to win the Super Bowl and play a little Black Jack. My main goal was to get up early and catch our flight back to New York City Monday morning.

But about 10 minutes after walking into my hotel room covered in dust and ready for a shower, my SiriusXM colleague Dooley Watts called me from his room on the 17th floor.

“Holliday, there’s been a shooting at the festival,” Watts told me.

The hotel I was in was the center of the worst mass shooting in US history. It was unfolding as I was trapped in this room on the fifth floor as the hotel went on lockdown.

Another SiriusXM colleague, Corey Chiocchio, was also on the fifth floor. We were all as safe as we could be inside Mandalay Bay as dozens of officers flooded the hotel trying to stop the bloodshed.

I had a phone chain and was able to make contact with everyone and confirm they were all alive. I then started calling and waking up executives at SiriusXM. My first call was to my boss SiriusXM Senior Vice President Jason Schramm. I got Schramm’s voicemail but he would call me back about an hour later.

“Holliday, are you OK?” Schramm asked.

I could hear the fear in his voice.

“Yeah, I’m fine. Everyone is alive. It’s just Orlando all over again,” I said to him.

Hours later, reports surfaced that the gunman was dead in the hotel. The shooting had stopped. Six SWAT team members banged on my door around 4 a.m. Monday. I was never so happy to see armed men holding guns in my face.

They swept my room.

One of the officers who noticed my mini newsroom set up with my two laptops, two cellphones and CNN live coverage on the TV, said to me, “It looks like you know what’s going on.”

At 7 a.m. Monday, with the sun shining, I decided to break free from my hotel room and see what was happening even as dead bodies were still lying along the Las Vegas Strip.  Festivalgoers covered in blood and scars far beyond the visible scrapes and bruises made their way through the lobby to the elevators in tears.

A portion of the hotel, both inside and outside, were blocked off by yellow crime scene tape.

The airport was open and our flight back home was still set to take off around 11 a.m. I grabbed Chiocchio, who was my travel buddy and on the same flight as me. We packed our bags and left the Mandalay Bay with much fear and loathing.

I cried for the first time.

Chiocchio’s mom wanted to talk to me. She thanked me for helping get her then 20-something son home and making sure he was safe during the shooting.

“You’re welcome,” I told her as I fought back tears.

I cried in spurts on that four-hour plane ride home too, sitting between an older man and woman who probably thought I was crazy. I finally made it back to my Jersey City apartment late Monday — a little more than 24 hours after being trapped in my Mandalay Bay hotel room on the fifth floor.

Tons of messages and well wishes from my SiriusXM colleagues, family and friends would pour in over the following days. I talked with many and reached out to the counseling services provided by the company.

I was fully aware after my 20-plus years of covering breaking news and my horrific experiences at music festivals (including Woodstock ’99 mayhem) that I have PTSD.

A few days after returning from Vegas, I received a call from a SiriusXM executive who had never spoken to me before. During the course of the conversation, he said to me, “It could have been worse.”

But for me, there is still a lot of fear and loathing as I head back to Las Vegas for the first time in five years.