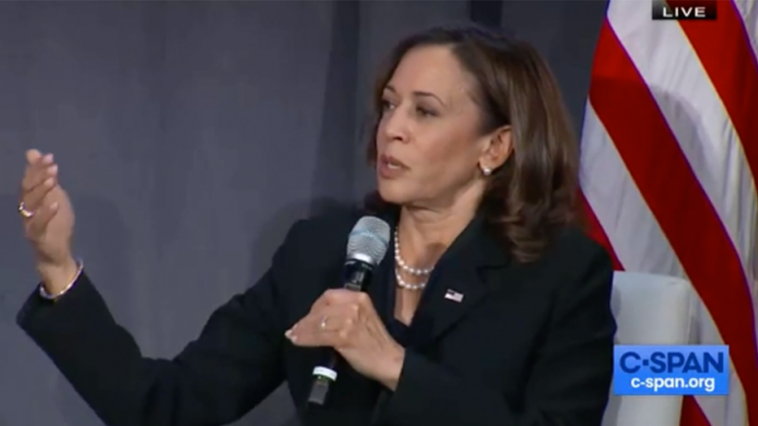 Twitter hammered Vice President Kamala Harris for a recent speech in which she described that federal Hurricane Ian relief would be based on “equity” and prioritize people in “communities of color.”

Speaking to actress Priyanka Chopra Jonas at the Democratic National Committee’s Women’s Leadership Forum on Friday, Harris claimed that people of color and low-income communities are most affected by natural disasters such as Hurricane Ian. Because of this, Harris described how federal relief should be given “based on equity.”

The Vice President declared, “It is our lowest income communities and our communities of color that are most impacted by these extreme conditions and impacted by issues that are not of their own making.”

She added, “And if we want people to be in an equal palace, sometimes we have to take into account those disparities and do that work.” The audience applauded Harris’ statements.

Though critics on Twitter were outraged by her claims, with many accusing her of being racist towards victims of Hurricane Ian in Florida. Some even claimed she was confusing and scaring storm survivors worried they might not get help quickly because they weren’t living in low-income communities.

Tesla owner Elon Musk slammed the Vice President’s quote, stating, “Should be according to greatest need, not race or anything else.”

Students for Trump founder Ryan Fournier tweeted, “You can’t make this up. Kamala Harris said the administration will be giving hurricane resources ‘based on equity’ by directing funds to ‘communities of color.’ I guess everyone else is just screwed.”

Gov. Ron DeSantis, R-Fla., rapid response director Christina Pushaw blasted Harris, calling her claims “false” and assuring Americans that FEMA has been giving aid to all Hurricane Ian survivors regardless of race. “This is false. @VP’s rhetoric is causing undue panic and must be clarified. FEMA Individual Assistance is already available to all Floridians impacted by Hurricane Ian, regardless of race or background. If you need assistance visit http://disasterassistance.gov or call 1-800-621-3362.”

Journalist Ian Miles Cheong said, “Just say it. Poor white people are screwed and Kamala Harris is gloating about it the same way she gloated about sending thousands of black men to prison over drug-related misdemeanors.”

In another tweet, he slammed the media for ignoring Harris’ claims: “If journalists were any good at doing their jobs they’d be hammering Kamala Harris on the remarks she made today about how white families affected by Hurricane Ian won’t be getting any federal funds because the money will be diverted to ‘communities of color’ before all else.”

Conservative YouTubers, the Hodgetwins, tweeted, “She would be worse than Biden, if that’s possible.”

Journalist Kyle Becker asked, “Can we just agree this is a tipping point when the ‘equity’ claptrap has jumped the neocommunist shark?”

Conservative author John Hawkins mocked Harris and the left, tweeting, “Only liberals could find a way to make hurricanes all about race.”

Author Jim Hanson asserted, “That is a violation of the Civil Rights Act.”

And American Greatness senior writer Julie Kelly tweeted about the irony of Harris’ statements. She said, “This regime is pouring tens of billions into one of the whitest countries on Earth but warning white Americans to get in the back of the line for their own money to recover from a catastrophic hurricane. And watch her malicious facial expression at the end.”

Hundreds in South Carolina have been brought to dry ground after Hurricane Ian. (North Port Police)