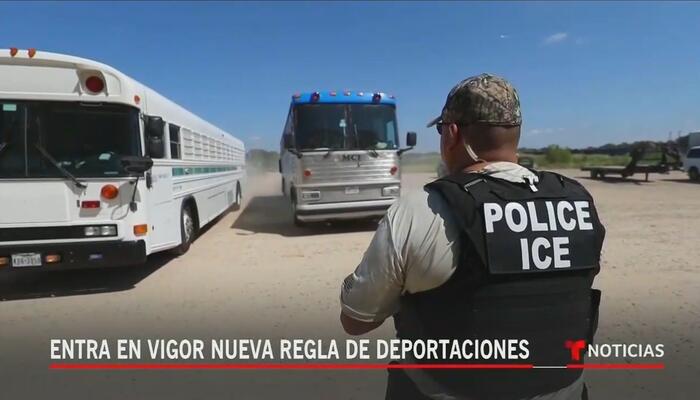 The national Latino newscasts enthusiastically headlined the implementation, on November 29th, of the new DHS Immigration Enforcement Priorities that exclude illegal entry as a cause for deportation and save undocumented immigrants from the “hardships” and “persecution” they are subjected to for breaking the law.

As both Telemundo and Univision reported, the new directives signed by Secretary of Homeland Security Alejandro Mayorkas on September 30th “are consistent with President Biden’s legalization initiative” (and the liberal media’s agenda), to limit the power of ICE and open our borders, thus ensuring for them a permanent audience and their own long-term survival.

JULIO VAQUEIRO: Let’s talk about immigration now. Important: Starting today no immigrant can be arrested just for not having documents.

ILIA CALDERÓN: The new deportation rules adopted by President Biden´s administration came into force today and its most important effect is that it prohibits deporting immigrants from the country because they are undocumented.

FELICIDAD AVELEYRA: As of today, ICE stops arresting and deporting immigrants just because they are undocumented.

EDGAR MUÑOZ: Immigrant workers are very vulnerable and that is why those who report their abusive employers and landlords will not be arrested either.

ALEX GÁLVEZ, ESQ.: We think there’s going to be immigration relief in the future.

MUÑOZ: And so, Felicidad, being undocumented is no longer a requirement, a fundamental element, for being deported from this country. Back to you.

AVELEYRA: At least they can have peace of mind.

So much for Biden’s “Don’t Come or you’ll be deported” claim, repeated by the likes of Jorge Ramos, in an effort to save public support for Joe Biden’s massive immigration bill soon to be voted on in Congress. Nonetheless, as immigration lawyer Alex Galvez told Univision, the left is convinced that “there’s going to be immigration relief in the future.”

Of note: it’s time that the Latino nets desist from lumping Hispanics together under the undocumented category. While this portion of the Hispanic population may be their “bread and butter” audience, pretending that only “immigrant workers are very vulnerable” to “abusive employers and landlords” to elicit empathy, or that law abiding Hispanic citizens don´t count, only confirms their detachment from reality.

Finally, anchor Felicidad Aveleyra´s closing – “At least they can have peace of mind” – gets a thumbs down: the new rules only encourage more massive crossing into the United States with all the problems that this entails.

Help the MRC fight against bias in the Spanish-speaking media. Follow this link.