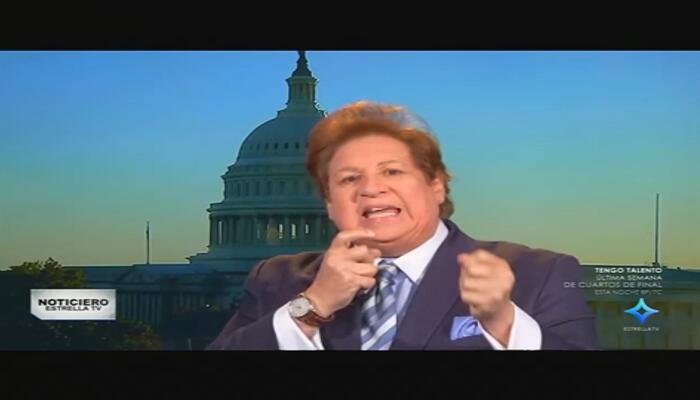 Estrella TV hit rock bottom with a caustic report ridden with omissions and misinformation, and whose sole purpose was to fuel racial grievance in the midst of the Kenosha, Wisconsin, trial of Kyle Rittenhouse. The events in question occurred in August 2020, during the violent Black Lives Matter riots in that city.

Reporter Armando Guzman adheres to a storyline crafted around misinformation and racial grievance, delivering the first lie just seconds into his report; Rittenhouse, he said, is a seventeen-year-old white boy who “killed two black men and injured another white man.” All three men were white.

Take a look at how Guzmán effortlessly passes fiction for truth in this video where he mentions race five times, and sows hatred by saying that Gaige Grosskreutz only survived because he was white.

PALMIRA PÉREZ: Wisconsin marks the sixth day of the trial of the teenager accused of killing two men and wounding others during the violent protests of 2020. From Washington, Armando Guzman reports what happened in court today.

ARMANDO GUZMAN: They demand justice because these are racial protests, over the trial of a seventeen-year-old white man who killed two black men and injured another white man during clashes last August in Wisconsin. Witnesses such as Kenosha police detective Martin Howard have clarified videos from the night of the shooting for the jury; first there are scenes of the defendant at the protests carrying his automatic rifle.

The trial will continue, but the most important witness is Gaige Grosskreutz who you see here with a beard. He is a paramedic who, trying to help those who were shot, also received several shots from the defendant’s rifle.

GAIGE GROSSKREUTZ: I thought that the defendant was an active shooter

GUZMAN: This testimony is extremely important. All last week, there were witnesses saying that the attacker had fired in self-defense and in defense of businesses on the streets in Wisconsin, from all the protesters. But now in this testimony, he declared that Rittenhouse himself was an active shooter, which is tremendously important because he throws all the other testimonies overboard, and above all else, because it comes from someone who was also attacked by Rittenhouse, who survived, and who is white.

Anyone who saw or was aware of the trial (even liberal media such as CNN reported it) knows that “star” witness mentioned by Guzman, Gaige Grosskreutz, admitted: 1) that he was armed, a fact that he had previously hidden, and 2) that he pointed his gun at Rittenhouse first. But of course, the truth did not suit Guzman’s forced rhetoric of racism, choosing instead to exaggerate to the point of lying.

But… the truth always comes to light, and after the Director of MRC Latino, Jorge Bonilla denounced the fallacy via Twitter, Estrella TV proceeded to delete the tweet promoting Guzmán’s FALSE report: 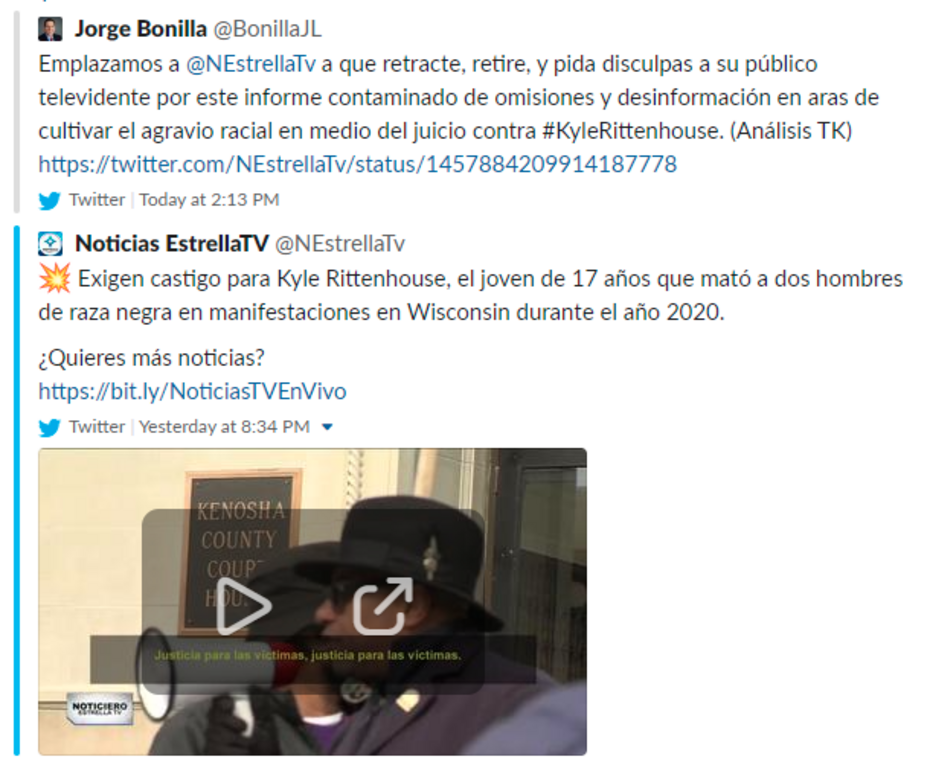 We call on @NEstrellaTv  to retract, withdraw, and apologize to their viewing public for this report tainted with omissions and misinformation in order to foster racial grievance in the midst of the trial against #KyleRittenhouse. 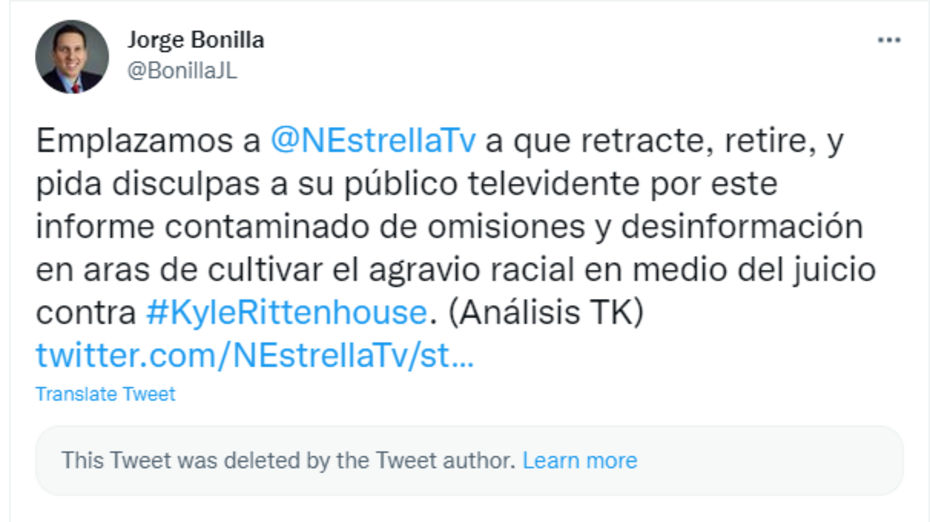 Evidently, Estrella TV got the message. We hope they now now resist the temptation to further disinform their audiences in order to accommodate their liberal agenda.

Help the MRC in its mission to end bias in Spanish-speaking media. Follow this link.