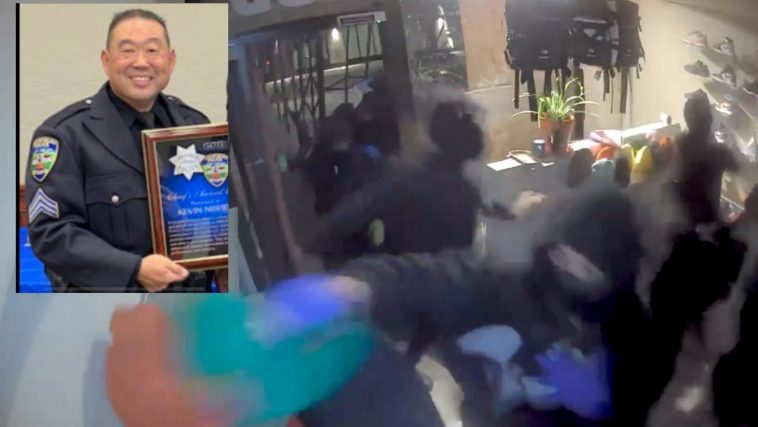 A retired Oakland police officer has tragically passed away from his injuries after he was shot while protecting a local TV crew that was documenting a large flash mob of looters as they ravaged several stores earlier this week.

Kevin Nishita was working as a security guard and had been assigned to protect a KRON4 news team as they covered the city’s recent wave of organized retail heists. On Wednesday, while on the scene at one of these smash-and-grabs, a group of looters broke off from the rest and went after the TV crew for their cameras and equipment.

Nishita immediately stepped in to protect the KRON4 team, confronting the looters head-on as they approached, but one of the dozen-or-so thugs quickly shot him in the abdomen, which ended up being fatal.

He died from his injuries on Saturday after being rushed to the hospital in critical condition and being treated for several days.

The killer, and the criminal looters, are still at large. The Oakland PD has issued a $32,500 reward for any information on the killers or the people involved.

From the Daily Mail:

“The news team from KRON4 had been reporting on Wednesday on a robbery which had involved 12 armed thugs wearing masks and hoods targeting a Prime 356 clothing store in Oakland,

Police officers also later found an additional victim – a Berkley man who had been hit by shrapnel – who was also transported to [the] hospital. He is in stable condition.”

KRON4’s Vice President Jim Rose called Nishita’s murder “senseless” and blamed it on “yet another violent criminal act” that has happened in the Oakland / San Francisco area.

Nishita will be given a full honor guard and precession by the Alameda County Sheriffs Office, according to the department.

We mourn the loss of retired police officer Kevin Nishita who honorably served our Bay Area Community. He was protecting/guarding a local news crew when he was senselessly murdered. Today, we escorted his body from the hospital with full law enforcement honors. 🙏 pic.twitter.com/ZbKRn7J732

Nishita’s death is the tragic, inevitable result of radical felon-first policies that enable violent thugs to run wild with no consequences – we already saw several people and police officers who were murdered as a result of the left’s unhinged violence during last year’s George Floyd looting and riots.

It’s no wonder we are seeing another massive wave of looting and destruction that is hitting democrat cities in California, Minnesota, and Illinois.