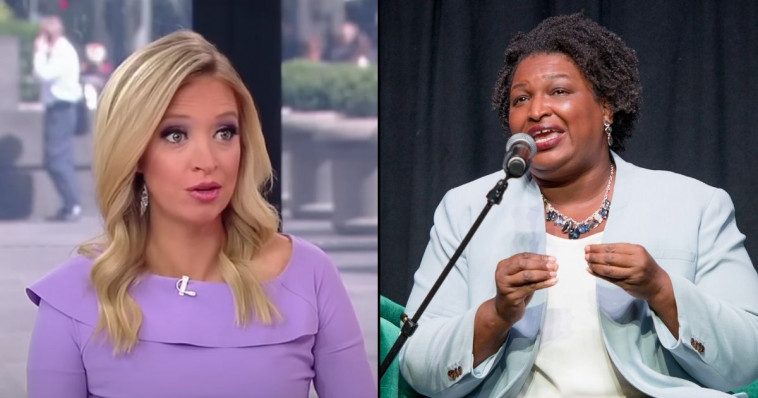 “There is no such thing as a heartbeat at six weeks. It is a manufactured sound designed to convince people that men have the right to take control of a woman’s body away from her,” Abrams said at a Tuesday event in Atlanta.

“I believe that abortion is a medical decision, not a political decision,” she added, according to the New York Post.

Georgia Democrat Stacey Abrams: “There is no such thing as a heartbeat at six weeks. It is a manufactured sound designed to convince people that men have the right to take control of a woman’s body.”

In 2019, Republican Gov. Brian Kemp signed a bill into law banning abortion after cardiac activity is detected. In July, the 11th U.S. Circuit Court of Appeals ruled the law could take effect.

McEnany responded to Abrams’ claim on Fox News’ “Outnumbered” by citing several medical organizations that disagree with the candidate.

The National Library of Medicine says that the unborn child’s heartbeat begins to develop at Week 5 and “beats at a regular rhythm” at Week 6.

The March of Dimes states that the baby’s heart starts beating at Week 5.

The U.K.’s National Health Service says the heart is forming and blood begins to circulate at Week 5.

Do you believe abortion should be outlawed?

The Mayo Clinic reports that the cardiovascular system begins to develop at five weeks and the heart starts to beat shortly afterward.

“So all these institutions that the left loves, that [Dr. Anthony] Fauci … I would assume bows down to — we no longer take them as credible because Stacey Abrams, a lunatic Democrat candidate, said something crazy,” McEnany said.

Nesheiwat recounted that she worked in an obstetric emergency room “where all we did was use fetal heart monitoring and ultrasounds all day long to take care of all these pregnant moms.”

“And I can tell you,” she continued, “by about five weeks and five days you can hear a fetal heart tone.”

McEnany further noted that Planned Parenthood recently changed its website to match Abrams’ claim that there is no definitive heartbeat at six weeks into a pregnancy.

“A part of the embryo starts to show cardiac activity. It sounds like a heartbeat on an ultrasound, but it’s not a fully-formed heart — it’s the earliest stage of the heart developing,” its website says regarding development that occurs between five and six weeks.

However, an archive of the same webpage from July says that “a very basic beating heart and circulatory system develop.”

“Don’t you love how the science changes after a Democrat like Stacey Abrams says something crazy?” McEnany tweeted.

GONE WITH THE SCIENCE!

Don’t you love how the science changes after a Democrat like Stacey Abrams says something crazy?

Take a look for yourself at all of the respected scientific institutions (until yesterday I guess) that refer to a heartbeat at 5-6 weeks @OutnumberedFNC ⬇️ pic.twitter.com/jdS9lkziYN

“Outnumbered” co-host Emily Compagno, who is an attorney, highlighted that the law regarding unborn children is inconsistent.

On the one hand, most states allow abortions up to some point in the pregnancy, but on the other, if an attacker kills an unborn child, he or she can be charged with murder or feticide.

“There is absolutely no sense to any of this,” Compagno argued.

Last week, on ABC’s “The View,” Abrams was asked whether she thinks there is any point during pregnancy at which abortion should be outlawed.

She responded that if the mother’s life is in danger, abortion should be allowed up to “the time of birth.”

Abrams elaborated, “I don’t think there’s anyone who says there should not be a limit, but the limit should not be made by politicians who don’t understand basic biology or apparently basic morality.”

Abrams’ campaign spokesman Alex Floyd further explained to the Post that the candidate supports the guidelines established in Roe v. Wade and Planned Parenthood v. Casey, in which justices found a fetus is viable at about 23 weeks.

“Stacey Abrams has already stated her support for limits in line with Roe and Casey — and doctors have been clear that the so-called ‘heartbeat law’ is not medically accurate,” Floyd said in a statement.

Randy DeSoto has written more than 2,000 articles for The Western Journal since he joined the company in 2015. He is a graduate of West Point and Regent University School of Law. He is the author of the book “We Hold These Truths” and screenwriter of the political documentary “I Want Your Money.”

We Hold These Truths