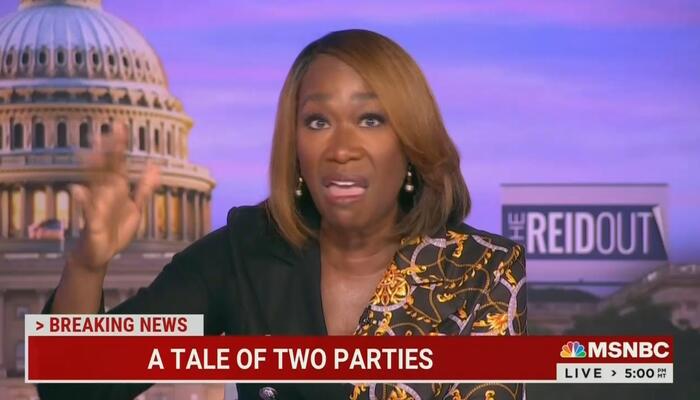 Continuing to double down on her lifestyle of spewing vile bile to the approval of her bosses at Comcast, MSNBC’s The ReidOut host Joy Reid came up with new ways Thursday to engage in incitement, calling Republicans “the YOLO parent” who doesn’t want people to have health care and “whose answer to anything and everything is to scream about the border and, ‘the scary Brown people are taking over America and meh, and history is mean.’”

At one point in this meltdown, Reid seemingly read off every possible insult she could think of for the “Nazi-curious” and “open-racism-embracing” GOP, but strangely left out something about them being homicidal maniacs and terrorists. And, at another point, she inadvertently stumbled into why people vote Republican.

Reid opened the show by warning of a “dark Republican future” with the censure of Congressman Paul Gosar (R-AZ) having served as “ useful demonstration of our two political parties” with the Democrats and GOP being “kind of like parents.

She then described Democrats as “the responsible” one “telling you to be decent to people who are different from you” (something Reid seems incapable of doing), “don’t threaten to kill people,” and “pass things like health care and roads and bridges and food for people who can’t afford it.”

As for the GOP, Reid resorted to standard but nonetheless evil talking points:

[T]hen there’s the other parent, the YOLO parent, the Republicans, who lets you stay up all night and eat Snickers for dinner, and take off your mask in a Covid cloud, and sorry, you can’t have health care if you get sick because YOLO and whose answer to anything and everything is to scream about the border and the scary Brown people are taking over America and meh, and history is mean. Cancel it. Now, to be clear, this is not a substantive party.

Going to Bulwark editor Tim Miller and then Democratic strategist Juanita Tolliver, Reid claimed a House GOP majority would murder an undetermined members of Congress with Covid, “impeach Joe Biden for…having a son they don’t like,” and ban U.S. history whenever it shows any white person having ever done wrong (click “expand”):

[T]he only thing that’s scarier than the fact that there are people walking around in the caucus who the minute they got back in the majority, would take off their masks and maybe cough Covid all over their colleagues and maybe get some people sick or dead, the only thing scarier than that is the fact that — that I cannot imagine any other scenario than those people actually being the leadership of the party. The fact that our democracy rests in the hands of that crew is terrifying to me. I feel like our democracy rests on the eye of a stupid needle. I don’t know.

They’re going to go after Adam Schiff. I mean, I could see them just trying to expel any members of Congress that they don’t like, right? They’ll go after Ilhan Omar. They’ll go after The Squad. They’re just going to spend all of their time doing fake investigations trying to impeach Joe Biden for God knows what, for, you know, having a son they don’t like. They’re gonna — they’re just — this is what they’re going to do. And not — and only tit for tat. I am still convinced that the reason that Republicans impeached Bill Clinton, they were hunting for a way to impeach him because — as payback for Nixon. Like, this is how the party operates. It’s just a payback party. There’s not going to be legislation other than maybe, like, banning the 1619 Project nationally and making it illegal to say that anybody white ever in history was ever mean.

After Tolliver suggested Democrats work to “scare folks into voting” for them, Reid lamented some voters dislike Democrats even though they’re “the government party” who’s “telling you” to not “cut all those trees down” because “it’s ruining the environment” and “you should wear your mask when walking around because of Covid.”

It was here that Reid whined how Republicans are “more attractive in some ways” than Democrats because “[t]hey’re the permission party” that lets “you…do what you want” even though they’re okay with “racist joke[s]” and people not wearing masks even though “700,000 people died.”

Reid’s ugly rhetoric about Republicans being homicidal Nazis and beyond basic humanity was made possible thanks to the endorsement of advertisers such as Applebee’s, Downy, SimpliSafe, and Vicks. Follow the links to see their contact information at the MRC’s Conservatives Fight Back page.

To see the relevant MSNBC transcript from November 18, click here.