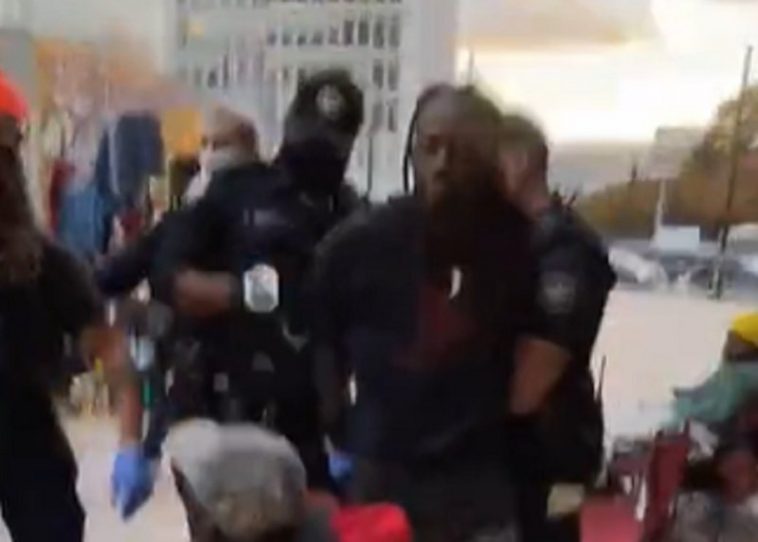 An anti-capitalist group that has been leading protests at the Centers for Disease Control and Prevention Headquarters were arrested during a prayer event and had their bible and guns confiscated.

Black Hammer describes themselves as an “anti-colonial organization that exists to take the land back for all Colonized people worldwide!” However, as Gateway Pundit has previously reported, they have been protesting alongside Trump supporters against the vaccine mandates.

Speaking to the Gateway Pundit, a spokesperson for the organization said that “this past Tuesday, the Atlanta police department swooped in to arrest six members of the Black Hammer Organization. Atlanta Hammers were in Woodruff Park in downtown ATL on Tuesday evening feeding and clothing the homeless, reading from the Holy Bible. Sixteen officers were ordered to surround the event, confiscate the Bible, and our legally purchased firearms. The six of us, including our Commander-in-Chief Gazi Kodzo, were carted off to Fulton County Detention Center to be held without bond.”

Black Hammer provided the Gateway Pundit with a link to a video of the arrests, which begin 52 minutes into the livestream footage.

The spokesperson said that the city of Atlanta appears to be targeting their upcoming March On The CDC on November 22nd, and scheduled their court appearances for the same day as the viral event.

“We are certain that the liberal arm of the city is targeting us because a separate Church Organization at Woodruff Park, which has been preaching for over a year that people should take Fraud Fauci’s vaccine, has seen no censorship. They’re sellout pastor has seen no infringement against his right to free speech. Sixteen police officers were not give the same order to carry him off to jail,” the statement from the spokesperson continued.

The statement continued, “the liberal establishment of Atlanta has clearly shown its hand in trying to shut down our work to feed the homeless, to preach the good word of God and to push back against vaccine tyranny. And for what? For doing more to help our homeless community than mayor Keisha Lance Bottoms ever did. But we will not live in fear of censorship. We will continue to use the power of prayer against Demon-crats like mayor Bottoms, we will show out in full force for the March On The CDC on Nov 22. The walls of Jericho will come crashing down when we decide to stand up!”

Kodzo previously told the Gateway Pundit that though they disagree with Trump supporters on many things, they are happy to protest alongside them on this issue.

“All these Socialist organizations, all of them, are pushing the vaccine. I mean, they were even pushing it back in the day when only old people could take it,” he explained. “They are telling me that it’s okay for Joe Biden to say that my people can’t work if we do not take this vaccine. If you can’t agree with me that my people have the right to decide what goes into their body, and that if they make a choice you disagree with, that they still have a right to earn money and be able to eat — if you can’t agree with me on that, there’s nothing else for me to talk to you about. I don’t care about Marx. I don’t care about your hammer and sickle. You don’t want me to have a right not to have an injection into my body?”

“Even with all the politics that I believe in, like anti-colonialism and the white power system, I do not agree with white people not being able to feed their children. I don’t want that type of world. If you say you’re a freedom fighter, how much more to the base of freedom can you get than this issue?” Kodzo continued.

Black Hammer is attempting to raise money for bail. Those who wish to contribute can do so at $BHOBailFund on CashApp.