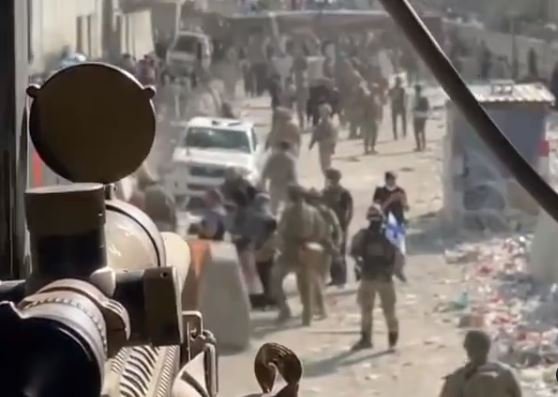 In August Joe Biden turned over Afghanistan to the Taliban terrorists and armed them with $80 billion in US weapons.

It was the greatest transfer of weapons to an enemy force in world history.

At the same time, 13 American servicemen and women were murdered by an ISIS terrorist Abdul Rehman, after Biden put US troops in an impossible situation with an impossible mission.

Following the attack US soldiers witnesses described ISIS-K and the Taliban as essentially the same group.

US Volunteer Who Witnessed Kabul Airport Bombing: “ISIS-K and Taliban are THE EXACT SAME Organization” (VIDEO)

During the nonsensical surrender to the Taliban the Biden regime and international teams bragged about evacuating over 100,000 Afghans from Kabul before the US military fled the country.

Thousands of Americans and green card holders still remain in Afghanistan to this day.  We had a family in Afghanistan contact The Gateway Pundit last week, months after the withdrawal after Joe Biden left them stranded in the country.

According to our report from military sources on the ground at the time, Joe Biden was not vetting any of the Afghans who were fleeing the country.

According to US Marines on the ground in Kabul at the time of departure, via Caz from The Raid Team Co., the military was not even checking the names of Afghans they were loading into planes out of Afghanistan.

US Marines on the ground at the time said the Biden regime only wanted the numbers for propaganda purposes and did not vet the Afghans flying out of Kabul.

This was the plan all along.  And Jen Psaki and the Biden regime then bragged about how many Afghans they rescued from Kabul omitting the fact that these people were not vetted and that it was a mad dash to the planes to get out.

In October Senator Josh Hawley (R-MO) posted an email from an American on the ground in Afghanistan during the disastrous exit who insists there was NO vetting of the Afghans they were loading on the planes to come to America.

The Taliban was put in charge of vetting the Afghans who they allowed to enter the airport perimeter.  Lord only knows who they were allowing to through to the planes.

NEWS: This email was shared w/ me by an American official present jn Afghanistan during the evacuation who was shocked by Administration’s failure to vet Afghans before they were evacuated. Email details orders from Joe Biden to fill up the planes – even without vetting pic.twitter.com/LJq0dHlcm0

And now officials finally admit that almost none of the Afghans who stormed the airport and flooded the planes were vetted before leaving Afghanistan.

The Biden administration allowed nearly 100,000 unvetted Afghans into the US — but stranded as many as 14,000 Americans in the country.

FLASHBACK: Watch Jen Psaki Lie Through Her Teeth About 100 Americans Left in Afghanistan – Now We Know Up to 14,000 Americans Were Stranded There (VIDEO)

What a complete disaster!

These people are pure evil.  They’re lucky the fake news always covers for them.

God help the people they left behind to die.