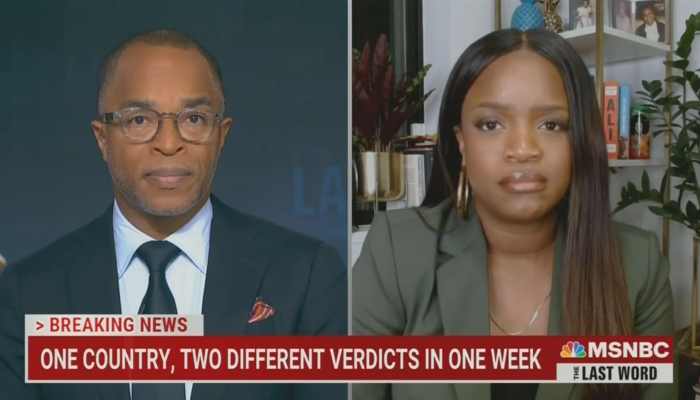 Surely, MSNBC contributor Brittany Packnett Cunningham was pleased by the outcome of the trial of the men charged in the death of Ahmaud Arbery. But the focus of her comments on MSNBC on Wednesday night leaves you wondering whether she saw the verdicts as complicating her task of painting the United States as irretrievably racist. You can’t ever feel better about it.

Interviewed by guest host Jonathan Capehart on The 11th Hour, Cunningham never once mentioned that a virtually all-white jury in a Deep South state had convicted all three defendants of murder. Instead, Cunningham downplayed the verdicts as “literally the very least we are owed.”

Cunningham concentrated instead on everything she sees as wrong with America. Thus, she decried the acquittal of police officer Darren Wilson for what she called the “murder” of Michael Brown in Ferguson, Missouri. This despite the Justice Department run by Eric Holder, Obama’s Attorney General, having cleared Wilson, finding “no credible evidence that Wilson willfully shot Brown as he was attempting to surrender or was otherwise not posing a threat.”

Capehart also asked Cunningham to comment on the column by Charles Blow of the New York Times—who called Kyle Rittenhouse a “murderer” despite his acquittal on all charges—in which he claimed that there are other Rittenhouses out there. Cunningham fervently agreed, saying: 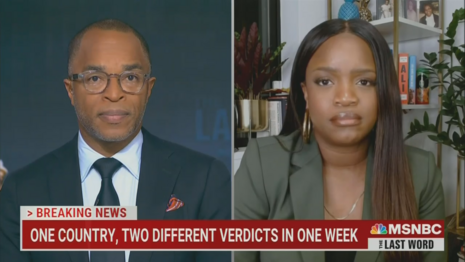 “It is a sure fact that there are other Kyle Rittenhouses out there. And we know that they’re out there because many of their parents are marching into school board meetings as we speak trying to make sure that the history of this country is not taught.”

In other words, parents who object to their children being indoctrinated with Critical Race Theory are racists who are raising tomorrow’s Rittenhouses.

Chalk this one up under “no instance of justice goes unpunished.” Telling America that no matter what happens, the country remains fundamentally evil, is no way to win hearts and minds — or elections.

BRITTANY PACKNETT CUNNINGHAM: I’m thinking about the non-conviction of Darren Wilson for the murder of Mike Brown in Ferguson in 2014. There’s a long pattern, a long thread here, of not only this criminal legal system letting people off the hook for doing the job that too often it wants to be able to do itself, of controlling and reining in black people and black freedom, but I’m also thinking of the particular thread that then takes those folks and lionizes them, that they want to create another statute to stand at that altar of white supremacy that they can worship and learn from.

CAPEHART: You know, Brittany, New York Times columnist Charles Blow writes, “the great threat, and real possibility, is that there are other Rittenhouses out there—young men who watched this verdict and saw how the right has embraced and celebrated a murderer, and now want to follow his lead.” Brittany, how can our country respond to white vigilantes being inspired by the Rittenhouse acquittal?

CUNNINGHAM: Well, I think that Charles Blow is spot on, and the truth of the matter is, it’s not probable or possible. It is a sure fact that there are other Kyle Rittenhouses out there. And we know that they’re out there because many of their parents are marching into school board meetings as we speak, trying to make sure that the history of this country is not taught.

The guilty verdicts that we saw in the Arbery murder trial today, that was literally the very least that we are owed —

CUNNINGHAM: — and you know how much it took for us to even get a semblance of that kind of accountability. So this work is going to continue.