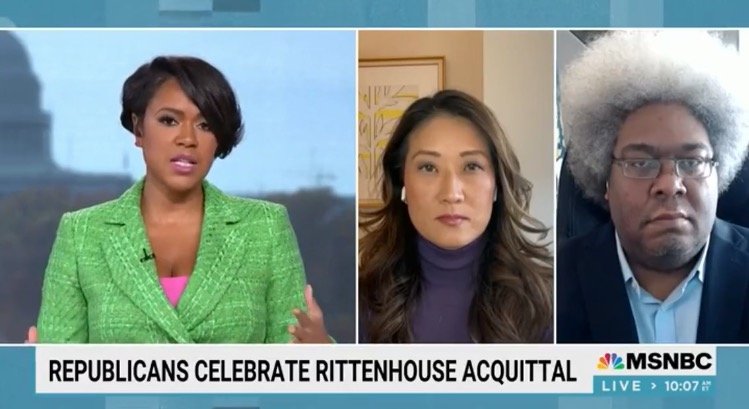 MSNBC host Tiffany Cross on Saturday night called Kyle Rittenhouse a “little murderous white supremacist” one day after he was found not guilty by a Wisconsin jury.

After reviewing evidence, a jury found that Kyle Rittenhouse acted in self-defense after he shot three men, two fatally, in August 2020.

The demons in the media continue to defame Rittenhouse as a ‘white supremacist’ and ‘murderer.’

“The fact that white supremacists roam the halls of Congress freely and celebrate this little murderous white supremacist and the fact that he gets to walk the streets freely, it lets you know these people have access to instituting laws…they run the legislative branch…” Tiffany Cross said.

“Welcome to the modern Republican party,” the guest said ranting about white people and Matt Gaetz.

Her guest then goes on a racist rant about white people being in favor of violence pic.twitter.com/6Vxw0sx6lG

In response to MSNBC’s Tiffany Cross’ smear of Rittenhouse, attorney Jenna Ellis said, “Murder is a legal definition. Kyle was acquitted. This is textbook defamation with actual malice.”

Murder is a legal definition. Kyle was acquitted. This is textbook defamation with actual malice. https://t.co/ZCEzPcizUs