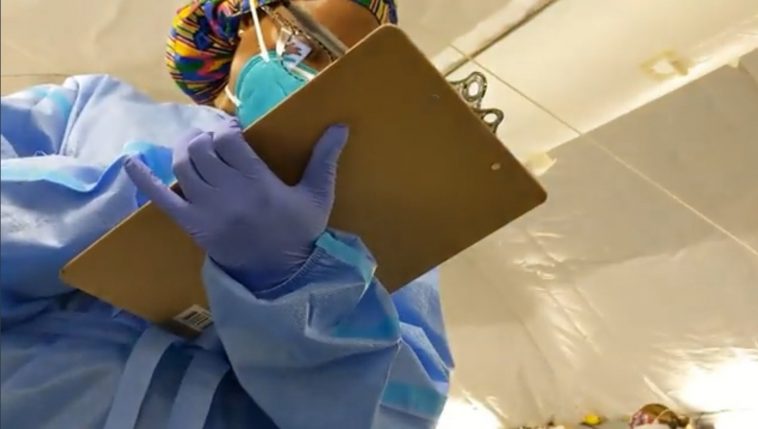 Earlier this year, the Texas Health and Human Services department (HHS) made monoclonal antibody treatments available to COVID patients following its Emergency Use Authorization by the Food and Drug Administration (FDA) in February.

The state has issued tens of thousands of monoclonal antibody treatments over the past several months, but recently, thanks to a supply shortage spurred by the Biden administration, the agency has begun segregating who can recieve the treatment based solely on the color of their skin.

Now, the state is only providing the treatments to “high risk ethnicity groups,” while actively refusing to provide the same care to whites who have been diagnosed with Covid.

According to Texas HHS, if you are white, you must be over 65 and/or have additional “high risk” factors to recieve the same treatment as other American citizens.

In one shocking example of this state sponsored racism that was caught on video, Infowars host Harrison Smith visited a Texas HHS clinic on Saturday where he was denied monoclonal antibody treatment simply because he is white.

Smith, who hosts the American Journal on the InfoWars network, tweeted that he was denied the effective treatment for Covid because of his race, and that he was told that if he had been black or hispanic – then he would have been eligible.

He added that experiencing the modern-day segregation as “f*cking insane.”

Denied medical service because of my race. pic.twitter.com/FgtO3oiSPG

Smith even posted the Texas HHS “state infusion hotline” phone number so people could ask the agency about their racist policy themselves.

Dave Riely – a former republican candidate – took him up on the request and posted a video of his call with the agency. Sure enough, the HHS employee who answered the phone confirmed the policy.

Reily: “So if you are a healthy, in-shape, Caucasian, and you show up, you are not gonna get an infusion?”

HHS employee: “Based on the criteria that we go by right now, that is correct,” they confirmed.

“So if a young, fit white guy shows up he’ll be denied service?”

This type of segregation, especially when it comes to medical treatments, is OUTRAGEOUS, and something that would normally be seen in a place like Communist China, where they are currently denying Uyghurs healthcare along similar racist lines – its absolutely sickening that this is taking place in the US.

The infusion centers where the monoclonal antibody treatments are taking place are directly funded by the government of Texas, which means that Governor Greg Abbott’s administration should – at the very least – be aware of the inexcusable policy.