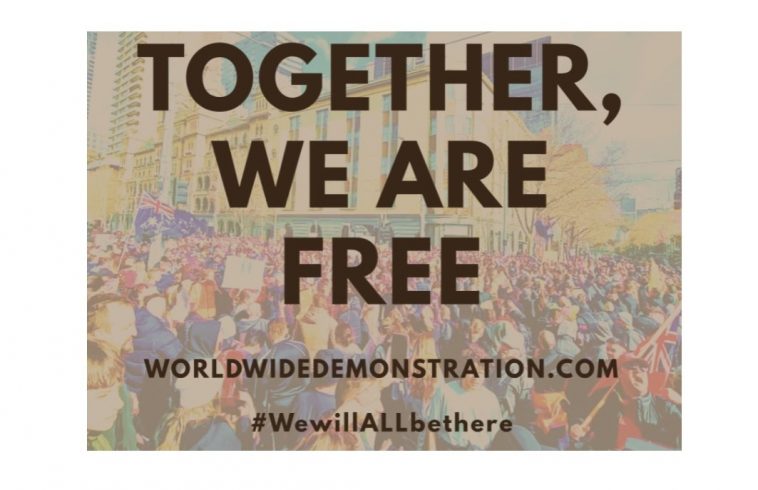 The World Wide Rally For Freedom is returning again tomorrow in New York City and in other cities around the world. Organizers predict this rally will be the largest health freedom rally so far in the country to date and are asking that all attend.

“We need all hands on deck!” said Kevin Peters, one of the New York Organizers.

“They are coming after the small children hard now with these vaccines in New York- pushing children ages 5-11 to get these shots all over the city with these vaccine pop ups parked outside of schools. It’s upsetting. Offering them candy, balloons, money, even scholarships to get the shot- its very disturbing to witness and screams of desperation. Parents need to fight back and know that they have the rights to their children, not the state,” said Jo Rose, one of the event organizers. “This rally we welcome families and children to attend as children are the new leaders of the future and should witness this monumental event for inspiration.”

“One Day. Everyone Together. We Will All Be There.” is the slogan the organization had adopted.

“We will not allow our inalienable Human Rights to be re-packaged as Human Privileges, to be conditioned upon compliance with Authoritarianism. Throughout history, Humanity has been tried and tested in difficult times, but in the end, Freedom Always Wins. We stand for the rights of all people to push back against infringements against their Freedom by joining us.

We can overcome widespread fear of social disapproval by building new social relationships with people that we align with and by helping people to find new communities to be a part of.
We will welcome those that are ready to change their mind, and to admit that they were wrong about their fear-induced support of tyrannical policies.

We see that the Coronavirus is rapidly becoming a new Religion of Fear and is being invoked to justify tyranny using the same repressive mechanisms of state control over dress, language, and social interactions that have been used historically in past theocratic regimes.

We will push back against this Religion of Fear with our message of Freedom.” The New York City firefighters will be in attendance to continue their plight against the vaccine mandate that has left many of them jobless and as a result closed down many firehouses in New York City.

The last rally the firefighter group organized was in October where over 15,000+ people marched over the Brooklyn Bridge.

They are now joining forced with Worldwide Freedom, the New York Chapter being one of the largest anti-vaccine groups in Greater New York.

Cat McGuire, one of the event organizers, promised that the speakers will be uplifting, the march spirited, and the finale will be an “inspiring candlelight/lantern procession”. Rally goers are encouraged to wear white and bring a candle or votive for the candlelight procession after the rally at 5pm. See the flyer below for ore information and also the group’s Telegram Page. In addition to up-and-coming local leaders, notable speakers will include New York University Professor Mark Crispin Miller and author Naomi Wolf. Both are self described liberals that have joined forces with libertarian and conservative allies for this event to fight the unconstitutional mandates that have swept the state and nation. This will be Naomi Wolf’s first public speech at any health freedom rally.

As the mandates have gotten stricter, unlikely alliances have been formed between various groups in New York– such as Trump Supporters, Black Lives Matter, Workers Unions, frustrated Democrats, religious organizations and other conservative groups.

Last month a large group of angry protesters confronted NYC Mayor-Elect Eric Adams the day after the election as he walked down the street sipping a smoothie. The group followed him shouting their concerns- this ended in a showdown in front of city hall in Brooklyn where the Mayor-Elect agreed to to listen to the group’s concerns regarding the draconian mandates and address them.

“People forget how tough some New Yorkers are,” said activist and Newsmax host John Tabacco. “We don’t give up and the patriotic people of this city will never sleep as long as these tyrannical mandates are in place. We will not let this Government continue to castrate the people of this great state- we will not stop fighting until the big apple is back on its feet and restored to greatness.”

See the organizer group’s crowdsourcing page where they are fundraising for a professional grade sound system and stage for future events.

Many familiar with these grassroots events understand the need for a sound system that can reach the back of the crowd where all rally goers can hear the speakers, and passerby can also hear the message.

“This group has been hosting grassroots rallies for over a year now and really keeping the community together, giving a lot of us hope,” said rally goer Tina Ryan.

“Up until now we have pulled together sound systems by word of mouth within our community without asking for funding,” said organizer Kevin Peters. “This time due to the size of the crowd we are anticipating we are asking for our followers to help us financially to fund a professional large scale system managed by an engineer with decades of experience in events at this scale. So we are excited to really make our message heard throughout several blocks of Manhattan.” Cara Castronuova is a co-Founder of C.A.P.P. (Citizens Against Political Persecution and The People’s January 6th Commission. She is an Activist, Investigative Journalist, 2-Time Boxing Champion, Celebrity Fitness Trainer and Television Personality. You can follow her on Instagram & Twitter @CaraCastronuova. She is currently banned on Fakebook. You can contact her via the C.A.P.P. website at www.CitizensAPP.us or www.caracastronuova.com if you have any tips or would like to volunteer.